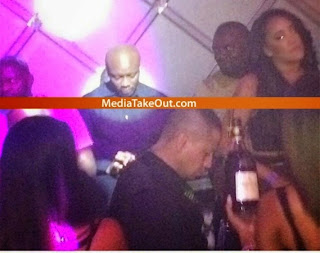 And this development is courtesy of recent pictures that came up showing them parting abroad with a married actress while on a business trip.

The actress is unveiled as Natalie Nunn fingered to be dating one of the big spenders.

The emergence of the pictures is believed to be causing uproar in the homes of the money men concerned. 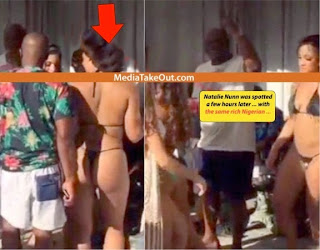 The married actress was in her ‘thongs’ in one picture and shown sitting on the laps of Rone who recently celebrated 10 years of marriage in another.

Rone is married to Utibe, the boss of fashion place Yutees.

She recently came on naijacelebrities.net radar over angst against her for oppressing friends with her affluence - http://www.naijacelebrities.net/2015/04/yutees-fashion-boss-utibe-rones.html#more
Posted by MAN ABOUT TOWN at 4:56 AM