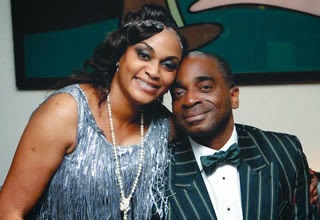 But this development comes in the face of resurfaced allegations of involvement in the collapse of the marriage of Lola and Femi Young.

An adulterer's libido is like hallucinogenic liquor, it gets him high and causes him to see and do things in the grip of lust that he wouldn't normally do while he is sober; like sleeping with another man's wife and tearing their marriage apart. But once the rampaging libido is satisfied, the adulterer retraces his step to his home and his marriage just like Segun Awolowo, grandson of late nationalist, Obafemi Awolowo, has done in the wake of his alleged closeness to Femi's wife, Lola Young.

According to a close family source, "Back when Segun was enthralled by Lola's beauty and fascinating backside, he lusted after her like a billy-goat until he got into her pants, defiled her womanhood and ripped the colourful fabric of her marriage to shreds. And having had his fill of Lola, who is the owner of Nail Room in Ikeja, Lagos, Segun tossed her aside like the shriveled rind of a badly sucked orange, to focus on his wife and his home".

There is no gainsaying Lola fast paced lifestyle ruined her marriage to her loving husband, Femi. But what friends and family of the Youngs find reprehensible is the fact that Segun Awolowo has decided to make a public show of celebrating his wife, Bolanle, as she clocks 50 in June. Segun is sparing no expenses to make the celebration a great and memorable one  But pray, what would Lola and Femi Young think? How would they feel?

It is never inaccurate to state that the couple, Femi in particular, are yet to recover from the heartbreak and trauma of their separation; Lola is ravaged and plagued by regret even though she tries to hide it, and Femi has become a mess of a man. When The Capital sighted him recently, at the London Heathrow Airport, he was looking spent and shriveled in an over-sized, light brown jacket. No thanks to friends for ruining the couple's happy marriage and turning them into ghosts of the happy couple they once depicted