There is a festering trouble in Imo state. 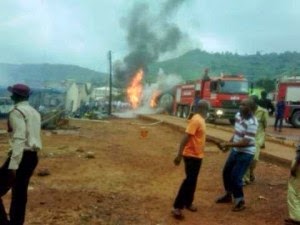 And this threatening mayhem has root in recent looting and destruction of properties by people labelled mourners.

Okwudor, a sleepy and peaceful community in Njaba Local Government Area of Imo State was yesterday thrown into mourning, as dozens of youths from the neighbouring community in Awo Ommamma, Oru East Local Government Area of the state attacked the community.
Similarly, several shops, vehicles and other properties worth millions of Naira were damaged or looted by the rampaging youths.

Investigations revealed that apart from the property destroyed, many people were reportedly injured.
Currently, the youths of Okwudor community were said to be regrouping for a reprisal attack, but for the timely intervention of the traditional ruler of the community, His Royal Highness Eze Anayo Durueburuo, who prevailed on them to allow the security agents carry out investigations.

It was learnt that the mayhem broke out when the youths from Ubahaogwu Awo Omamma community were conveying the corpse of a youth of the community from the Imo State University Teaching Hospital, Orlu.

The youth was said to have died during surgical operation at the hospital and while the youths were conveying his corpse from the hospital, what was supposed to be a mournful but peaceful match home turned bloody when the youths approached Okwudor community.

Trouble started when the youths started pulling down people’s stalls at Okwudor Junction, while others left with some bottles of cashew nuts and honey which were sold at the junction.

This did not go down well with some villagers who tried in vain to prevent the rampaging youths, as they continued to destroy any market stall in site till the popular Eke Okwudor where hell was let loose.

At the Eke Okwudor market square, the youths broke into many stores, looted and smashed the wind screens of every vehicle in sight, while some motorcycles were set ablaze.

As at the last count, no fewer than 12 shops at Eke Okwudor have either been looted or partly destroyed.

Although the Police Public Relations Officer, Mr. Vitalis Onugu, told The UNION that the report had not been brought to his knowledge, a source in the Njaba Police Divisional Headquarters, Umuaka, confirmed the incident.

He said the police in collaboration with the traditional ruler of the community and the Njaba local government chairman had already waded into the matter and that investigations were going on to unravel the cause and those behind the crisis.

Nnaka, who put the cost of properties lost in the incident to more than N10 million, urged the people of the community to calm down while assuring them that government would do everything to bring the perpetrators to book.

Also speaking with journalists in his palace, Eze Durueburuo, expressed surprise at the crisis, saying it was unprovoked.

According to him, the Awo Omamma youths acted in a manner to suggest that Okwudor people had a hand in the death of their deceased brother, if not “Why is it that of all the communities they passed, it is only Okwudor that they attacked in this manner”.

The monarch, who promptly prevailed on the youths of the community to stop the planned reprisal and saved the situation from further escalation, called on the police and relevant authorities to investigate the incident and bring those involved to book.

He called on the state and the local governments to come to the aide of the victims of the unwarranted attack as, according to him, they lost huge sums of money and valuables.