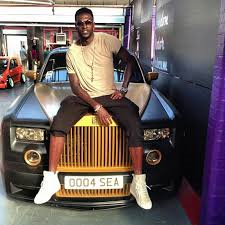 The consequent of public allegations of greed footballer Emmanuel Adebayo labelled against his family has started coming in.

His sister, Lucia has come out brand the popular round leather game player as a liar
..and

Following Adebayor’s recent facebook post in which he stated bitterly how his own family has treated him, taking more and more from him and yet claim he has done nothing for them, his sister-Lucia Adebayor has hit back, claiming the footballer lied about all he claimed he did for the family.

“Keep on lying to the whole world brother… where is the car you got for mum… you took it back… The house you claim you bought for sister are all lies… The phones Rotimi stole are all lies….Money is not everything oooo… we the family don’t even need you again just be on your own so we do the same…de fact you have it today doesn’t guarantee your tomorrow… May God Allah forgive you… you sent your own little nephews packing from your house at 12am….The Alphas and Mallams have done great harm to your life. You need God… Only God can save your soul…”

In his own lengthy post Adebayor posted on his Facebook two days ago,  the Tottenham Hotspur forward tears into his entire family.  His sisters,  his mother,  his brothers;  the only person spared was his late brother Peter Adebayor. He talked about the house in East Legon, which he said he bought for his sister Yabo to inhabit,  yet she rented out without his knowledge.  When he called to enquire,  she rained insults on him.

He also recounted how he gave huge sums to his brother Kola to start a business,  yet nothing materialised of that.  He got another of his brothers Rotimi into a football academy in France,  yet all he did was steal the mobile phones of other players. At a family meeting in 2005,  each family member requested for a house and a monthly wage;  how indolent.  He also said for years they opposed his efforts to establish a charity.

It’s a long post, detailing how at every stage his attempts to help is met with mismanagement and greed from his family members