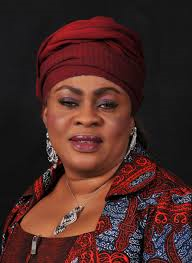 
Here are the details
News filtering in from Princess Stella Oduah's Sea Petroleum and Gas Company Limited (SPG) is disturbingly shocking. An inside source revealed to The Society Nigeria that workers of the company are really embittered with the former Minister of Aviation, they are said to be groaning under the pain of unpaid 8 months salary and other entitlements.

In her bid to becoming a Senator, Stella Oduah refused to pay her workers at SPG rather all her income from trading in Oil was diverted to oil her campaign network. The staffs were however shocked when after she won the Senate elections the backlog salary arrears stretched to 8 months without any concrete explanation for delay payment.

The staff members couldn’t even phantom the delay in the payment of their emoluments, because only last year Ms Oduah shelled out millions of naira for the expansion of her business empire, this was shortly after she was dropped as Minister. At the moment, some of her fuel stations at the Lekki area of Lagos are wearing new colour.

Another annoying development is that only recently the former Minister lavished over N100 million on new house in Abuja. Situated in a quiet reserve, at Mohammed Isma Street, off TY Danjuma Street, Asokoro Extension, Abuja is the talk about lavish mansion . The mansion boasts of 10 living rooms and an intricate design that speaks volumes about Oduah’s wealth. This is said to be causing disquiet within the company with some aggrieved staffs threatening to quit if situation remain.

Months after Princess Stella Oduah was relieved of her post as Aviation Minister following some damaging scandals about her person, ranging from the controversial purchase of 2 BMW bullet proof cars for N255 million without due process and another allegation of educational qualification racket, she was out of public reckoning until when she came out to signify interest in the Senate come 2015