Governor of Edo state, Adams Oshiomhole has taken his beautiful new wife Lara and a handful of friends abroad on vacation in the face of unpaid seven months workers salaries. 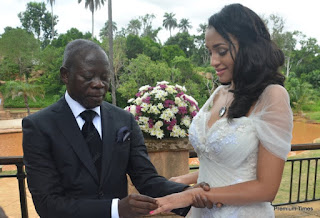 The bright dawn they promised breaks like dusk and the 'Change" they holler, resonate like echoes of a dreaded and recrudescent past.

If you take a long, careful look at certain prominent characters within the All Progressives Congress (APC), Nigeria's new ruling party, you will find that, there is little difference between them and disgraced chieftains of former ruling party, Peoples Democratic Party (PDP).

Edo State Governor, Adams Oshiomhole, for instance, presents a sad, shameful portrait of the APCThe former president of the Nigerian Labour Congress (NLC) and incumbent governor of Edo State, was until recently, a dependable, upright leader with integrity, at least to major sections of APC loyalists and Edo citizenry but no sooner did he get married to his trophy wife, Iara Forte, than the fraudulence in him seep to fore.

After spending tax payers' money to stage his grand wedding ceremony to his trophy wife, Oshiomhole decided to fly his friends and associates to Seychelles, on Edo State bill, to hold another round of lavish wedding celebration.

The governor's action is seen is highly insensitive and selfish at a time that he is owing civil servants in the state seven months' salary. But no matter what anyone thinks, Oshiomhole does not give a hoot; nothing trumps his lust and affection for Iara, a lawyer and top model, from the Cape Verde Islands.
Posted by MAN ABOUT TOWN at 1:37 AM