New Lagos Governor, Akinwunmi Ambode has two henchmen that are ready to go through thick and thin for him. 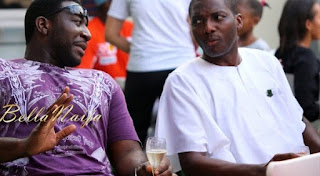 They Deji Williams and Bunmi Ariyo.


Here is their story.

As Governor Akinwunmi Ambode of Lagos State continues to preside over the affairs and activities of Lagos State Government, and in his capacity as the N0 1 citizen of the state, there are two strong persons who one needs to pass through before he/she gets anything done with the new Executive Governor of Lagos State. These two people are so close to Ambode and influential that they determine who sees Gov. Ambode or who does business with him. They both have names that ring a bell to all as far as Lagos State is concerned. They are Deji Williams and Bunmi Ariyo.
Deji Williams has always been very close to Ambode. He has been a Personal Assistant (PA) to him for quite a time now. Having spent the greater part of his life abroad, Deji Williams has now become one to reckon with as far as Lagos State is concerned. It is on record that Deji Williams was a Personal Assistant to Makanjuola Alabi, the controversial and sacked Managing Director of Lagos State Signage and Advertisement Agency (LASAA)

The closeness between Makanjuola and Deji Williams is due to the fact that both married from the same family. In other words, Deji Williams’s wife, Nike Williams is a younger sister to Makanjuola’s wife, Biola Alabi. Biola Alabi was the former MD of DSTv. Their kinship necessitated a fraudulent situation where Makanjuola Alabi, as the then MD of LASAA, had to pay 3.2million naira monthly to his sister in-law, Nike Williams.

Deji Williams is one of those people working closely with Governor Ambode, who do not like the immediate past governor of Lagos State, Mr. Babatunde Raji Fashola (SAN). One of the grudges Deji Williams has against the former governor may not be unconnected with transferring leadership role due to him as the brain behind the proposal that led to the establishment of Lagos State Facility Management Agency to another person. In fact, it is gathered that Deji Williams is one of those people that influenced the recent dismissal of loyalists of Babatunde Raji Fashola from Lagos State Government Agencies. It would be recalled that Deji Williams made so much money from Ambode Campaign Organisation that he promptly purchased a house worth one hundred and ninety million naira (#190, 000000) at Parkview Estate in Ikoyi.

When Gov. Ambode was in the Lagos State Ministry of Finance, Bunmi Ariyo was his Personal Assistant (PA). Similarly, at a time Governor Akinwunmi Ambode was the Head of Lagos Treasury, Mr. Ariyo was his PA. When Akinwunmi Ambode eventually rose to the position of Accountant General of Lagos State, he had no better person to make his PA than same Bunmi Ariyo. It is so glaring that Ambode loves and enjoys working with Bunmi Ariyo.

To prove his loyalty for Ambode, when Gov. Ambode left Lagos Civil Service, Bunmi Ariyo left with him.