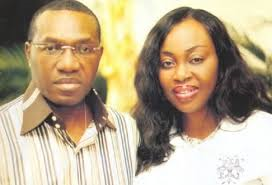 The festering fight that has pitched brothers, Andy and Chris Uba against each other has assumed an alarming dimension.

And fingered as the architect of this latest unpalatable twist famly mess is Faith Veledago, the wife of the Senator elect.

According to The ELITES, the war within the controversial Uba family occasioned by the victory of Andy Uba has scattered the family. Brothers have now drawn daggers expecting to draw the first blood from the other. The battle, we learnt is between senator Andy Uba and his mistress turned second wife, Faith Vedelago on one side, and Emmanuel Uba, Chris Uba and other family member on the other side. Emmanuel Uba is the eldest of the three Uba brothers while Chris is the youngest.


A close family source disclosed that things totally went awry in the Uba family the day Faith Vadelago entered Andy Uba’s life, getting pregnant for him bearing him a child and forcing him to marry her as his second wife and relegating Andy’s first wife, Obiageli and their four children to the background. It is said that it seems Faith Valedego uses a ‘diabolical remote’ through which she controls Andy Uba. Controversial Faith Veledago is the founding ‘pastor’ of Faith Miracle International Christian Center Wuse 2 located on Blayntre Street by Valencia hotel. She lives in a mind blowing luxurious hilltop mansion in Maitama, bought for her by Andy Uba.


Informant disclosed that, “You see, before the party primaries that threw up Andy Uba as the PDP Candidate, Chris Uba had shown interest in contesting for the same Anambra South Senatorial Seat.

It was learnt that, in the build up to the 2015 general elections, the Uba family, unanimously, agreed that Andy Uba should vacate the senate seat for his younger brother, Chris Uba, and give the governorship seat another trial. Andy reportedly agreed, but after losing out at the Anambra governorship primaries, he made a U-turn and insisted he would go for the senate.


“It is a well-known fact that Vedelago, Andy’s second wife is in total control of the happenings in his life. It was Faith Vedelago that prevailed on him to jettison the agreement he made with his brothers and family members. Andy practically turned his back against his family and that is why they are not happy with his recent electoral victory”, the source added. The family feud assumed a messier dimension when the two Uba brothers – Ugochukwu and Chris, decided to pitch their tent with Ernest Ndukwe, the APGA senatorial candidate.


Ndukwe has decided to challenge Andy’s purported victory at the election petition tribunal.
“Ernest Ndukwe came second in the result declared by INEC but he rejected it, claiming it was rigged in favour of Andy Uba. He is going to the tribunal to claim his mandate and he has the support of Andy Uba’s brothers – Chris and Ugochukwu. It is going to be a battle to finish”. The family source predicted.
Posted by MAN ABOUT TOWN at 9:10 AM