Victor Adelakun, the Auto dealer widely known by the street name Ade Lexus and his friend of same trade, Adebayo Orekoya otherwise known as Bobby Ibadan are back at each other. 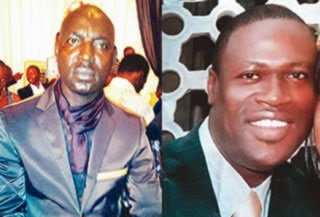 And here are the details of allegations of coveting friend’s wife that has snowballed into a counter claim of kidnapping and court case.

He said the claim by Victor that he wanted to assassinate him, was a ploy to distract the police from the truth.

He explained that some men arrested and tagged assassins by the police in Lagos State were actually sent to monitor Victor’s movement so that he could get him (Victor) red handed when he made a pass at Pearl.

PUNCH Metro had reported that the police arrested 46-year-old Adebayo after he allegedly sent a gang from his hometown in Ibadan, the Oyo State capital, to Lagos to kill Victor at a bar.

The men were said to be planning at a bar in Ikeja when an informant of the Special Anti-Robbery Squad eavesdropped on their conversation and alerted the officer in charge of SARS, Abba Kyari.

The suspects– Ibrahim Lawal, 27; Yomi Olanrewaju, 25; and Emmanuel Adewale, 25– after they were rounded up, reportedly confessed to the police that Adebayo sent them to kill their target and that they had been paid N140,000 as advance payment.

The police were said to have recovered N100,000 from the suspects, who were also caught with guns and Victor’s picture.

It was however learnt that at the conclusion of investigations, the police arraigned Adebayo on two counts of kidnapping.

The matter, which was brought before Chief Magistrate A. O. Komolafe of the Ikeja Magistrate’s Court, was later struck out on February 18, 2015.

A certified true copy of the judgment which was obtained by our correspondent showed that the matter was struck out for lack of diligent prosecution by the police and absence of witnesses.

Adebayo told PUNCH Metro that the incident was twisted out of proportion to destroy his reputation.

He said, “Ade (Victor) visited me and my wife in Ghana some years back to help him to secure admission for his son in the University of Ghana. During the visit, Ade first made a move on my wife.

“When Ade started sending my wife love messages, she showed me what my friend was up to. I read and recorded all he was doing until he arranged to meet with my wife at a club in Ikeja.

“I then sent the boys to the club to call me when Ade showed up to confront him with the evidence I had against him. But Ade ran to the police with false allegations.”

Adebayo’s wife, Pearl, a Ghanaian, told PUNCH Metro on the telephone that she had text messages of the conversation she had with Victor.

Pearl, who spoke from the United States of America, said, “I got to know him through my husband at the time he came to Ghana. Afterwards, I did not know where he got my number from, he started calling me. He was disturbing me with love messages and telephone calls.

“When I told my husband, he did not believe me at first. He said his friend could not do that.”

She said after Victor arranged a meeting with her at the club in Ikeja, her husband decided to send people to verify her claims.

“My husband is richer than him and could not have kidnapped him for money,” she added.

Victor expressed disappointment at the manner the police handled the case, insisting that Adebayo wanted to kill him.

He said, “I did not know about the incident; it was after the police apprehended the suspects that I was informed and when I got there, I saw the suspects, who confessed that they were sent to kill me.

“The police said it was a bailable offence. The police were on my side before he was arrested, but the story suddenly changed. They said the guy did not send them to kill me, but to kidnap me. That was why they charged him with kidnapping.”

On Adebayo’s wife, Victor said she had tried to seduce him several times on the instruction of her husband, with the aim of kidnapping him.

“He always used his wife to seduce and then kidnap the person for ransom. He had tried that with me, but I did not fall for it. It was after that that Adebayo sent the boys after me,” he added.

The Police Public Relations Officer, Lagos State Command, Kenneth Nwosu, said he would get back to our correspondent, but had yet to do so as of press time.
Posted by MAN ABOUT TOWN at 8:33 AM