UBA Chairman and Heirs Holdings boss, Tony Elumelu is in a bit of a fix according to fresh reports that surfaced. 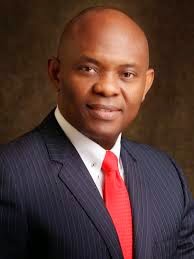 The money man is said to be running helter skelter to safe guard business deals perfected under the outgoing regime.

Since that historic moment when Prof. Atthairu Jega declared General Muhammed Buhari the winner of the 2015 Presidential election, some Nigerians have been running helter-skelter in a bid to avoid being tried and jailed by the incoming led administration of the retired military man. One of those Nigerians is Tony Elumelu.

It was gathered that Tony Elumelu has been trying everything possible to get in touch with the close associates of General Buhari so that he might escape being tried and jailed by the incoming government for misappropriation of public funds. However, regrettably it seems all his efforts have continued to prove abortive as many of the so called associates turned him down. Some of the associates he has met with for the purpose of winning Buhari to his side are Senator Bukola Saraki and former senator Mamora.

Tony Elumelu is presently the Chairman of United Bank for Africa (UBA). He is also the Chairman/CEO of Heirs Holdings, the pan-African proprietary investment company founded by him in 2010. Elemelu had previously retired as Group Managing Director/CEO of UBA in 2010 following the introduction by the Central Bank of Nigeria of 10-year tenure limits for bank’s CEOs. He is adjudged to be one of the richest Nigerians, and many believed he might have achieved through mismanagement of public funds.

naijahottestgist
Posted by MAN ABOUT TOWN at 12:45 PM