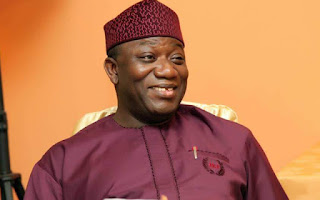 Secretary, Peoples Democratic Party Caretaker Committee in Ekiti State, Prince Diran Odeyemi, tells
ABIODUN NEJO that the state government is hiding so many things from the public as regard the Governor’s Lodge in Abuja

There was a building called Ekiti Governor’s Lodge at T. Y. Danjuma (Street), Asokoro, Abuja. All of a sudden, last month, the building was pulled down and there was no indication that anybody was in charge of the building. We observed there was a kind of construction going on there. We checked for a signboard, which is normally present at any project site belonging to a government. The signboard should tell the public who the engineer is, the type of building to be put there, the contractor, and the client. The information will be there for everyone to see. But there was none, which now gave indication that perhaps it had been sold and now belonged to a private organisation or person. We should ask questions as citizens of the country, as members of the Peoples Democratic Party and as concerned Nigerians. So, we asked the government what happened to Ekiti State Governor’s Lodge – has it been sold, to who, and at what price?


There is nothing to substantiate in this case; the government should state the true position. If they are telling us that it has not been sold, there are other questions that will follow. If it has not been sold, why was the building there demolished? They said the roof was leaking, if the roof of a building is leaking, does that make it uninhabitable such that you will have to pull down a multi-billion naira structure and try to rebuild another one? At what cost are you building a new structure? Who is the contractor? Was there any bidding? Did the contract follow due process? If you are building a governor’s lodge in Abuja and the people of Ekiti are not aware that you are spending about N1bn of their money to build a new structure after demolishing a better one, you should be answerable to them. That was exactly why we questioned them.

Also, last year, we realised they budgeted N1bn for the building in Abuja. We were waiting for them to see if the money was meant for renovation or something else, but at the end of the day, they reported this year that they spent N770.9m, leaving a balance of almost N250m. In the 2020 budget, they said the Abuja building would cost N250m. Then the question is – if you just pulled down a building last month, and last year, you spent N770.9bn, then on which of the buildings was the money spent? There is a mix-up there. Again, when we released a statement about the Abuja building, it took them four days to respond, so they could doctor the papers. Up till now, they have not produced any advert as tender or to show the contract went through due process. We are only saying that if you are claiming to be a government that is accountable, the people deserve to ask questions.

Que - But the government has said funds were appropriated for the project in the 2019 and 2020 budgets and that everything followed due process. Why are you not satisfied?

There is no evidence of bidding. The government cannot come up with a blatant lie and expect people to swallow it hook, line and sinker. Let them produce evidence that the contract was bid for. What we are trying to prove to Ekiti people is that the government is not informing them appropriately of its actions, and we suspect foul play.

Que - How will you react to the allegation that you are from Osun and only meddling in the affairs of Ekiti State?

Do I need to be an indigene to know what is happening in the state? I am a thoroughbred journalist and I can speak about any state in this country. If Kayode Fayemi, as the Chairman of Nigeria Governors’ Forum is not an interloper in the affairs of Kano, Bayelsa and Kaduna states, I, Diran Odeyemi, as a journalist, deserve to operate anywhere. Besides, as the PDP deputy national publicity secretary, I can talk about any state in this country. Also, being posted to Ekiti as the caretaker committee secretary encouraged me to raise this issue and I am still going to raise many. The point is – they have been running the government in secrecy. They have not been informing the people about their mode of operations, they are not free of corruption and we want to expose them constructively. The only thing they need to do is to provide answers, not to query where I come from.

Que - How do you react to the submission in some quarters that your party is still licking its wounds after the defeat you suffered in the last governorship election?

What is the correlation between losing an election and criticising them about a building that was demolished without appropriate information? What correlation does that have with a party asking if N1bn for governor’s lodge is the priority of Ekiti people at this period? What relevance does that have with the loss a party suffered in an election about two years ago? If you don’t have a reply to a question, you resort to blackmail. We are not moved by that. Let them explain the situation to the people of Ekiti. We are working towards taking back the government and the people have realised their mistake in Ekiti. We will put them on their toes and we will ask questions from time to time.

Que - A former PDP governor in the state, Ayo Fayose, was accused of renting his Abuja residence to the state government – is your query not the case of throwing stones from a glass house?

Fayose is not dead, he is very much alive. This is a question for him or whoever is handling his image. But then, why is it that it was when we asked questions about the governor’s lodge that they suddenly realised that Fayose rented his apartment to the state government? Why was that not exposed before now? When you don’t have an answer, you are leaving relevant questions for something that is irrelevant. The time Fayose was building a bridge in Ekiti, they said the people of Ekiti did not need a bridge. The question now is: do the people of Ekiti need a governor’s lodge of over N1bn in Abuja? What we are talking about now is the demolition of a lodge and building of a new one. We suspect corruption in the whole process.

Que - You said the PDP was preparing to come back to power in Ekiti, isn’t this a tall dream considering the state of your party?

Part of what we are doing towards reclaiming Ekiti is what brought us to Ekiti as the caretaker committee. We will reconcile all the leaders, we will come up as a strong team, we will strategise and we will convince the people of Ekiti. Now, they know the difference. We will ask them to compare our time with what is happening to them right now. This is the campaign. Part of the campaign is what we are saying now: these people that promised you open administration are doing a lot of things in secret and we will expose them. Although we don’t believe we lost the last election in the first place, we will be more careful when planning for the next election and strategise. And with the support of the people of Ekiti, we will come back.