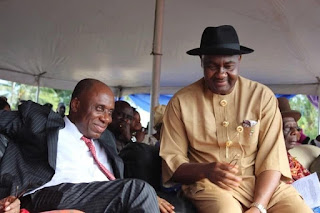 The leadership crisis rocking the All Progressives Congress worsened on Saturday with two factions of the APC in Rivers State clashing over the proposed replacement of the Deputy National Secretary of the All
Progressives Congress, Chief Victor Giadom, by Worgu Boms.

The APC executive committee in Rivers State which is believed to be loyal to a former Senator representing Rivers South-East Senatorial District at the National Assembly, Magnus Abe, had recommended Boms, a former Attonery General and Commissioner of Justice of the state, as replacement for Giadom.

The APC National Working Committee has called for the replacement of Giadom, after he claimed to be the acting chairman of the party following the suspension of the National Chairman, Adams Oshiomhole.

The NWC claimed that Giadom’s position had been declared vacant when he resigned his position to  contest the 2019 election as a running mate to the Rivers State governorship candidate, Tonye Cole.

However, supporters of the Minister of Transportation, Mr Rotimi Amaechi, and those of Abe clashed on Saturday over the plan to replace Giadom with Boms.

Amaechi and Abe supporters of the APC in the state have been engaged in a running  battle after the party split into two factions following the latter’s interest in the 2015 and 2019 governorship elections, which Amaechi opposed.

Also, following Giadom’s resignation prior to the 2019 governorship election, his position as the Deputy National Secretary of the APC was reportedly declared vacant by the party.

This was however not a major issue until two weeks ago when he declared himself as the acting national chairman, following the suspension of Oshiomhole as the national chair.

Speaking with Sunday PUNCH, the acting National Chairman of the APC, Ajimobi, who spoke through the National Vice Chairman (South-South), Hilliard Eta, said the National Secretariat had received communication from the Rivers State chapter of the party with respect to the replacement of Giadom as Deputy National Secretary.

He said, “You are aware that on Friday, a competent court of jurisdiction declared Chief Victor Giadom as not being a member of the National Working Committee and should never parade himself as such.

“Even before then, there was a resolution by the NWC asking the Southern zone of the party, which I head, to transmit a name for his replacement or filling of the vacancy made possible by his resignation to contest as the deputy governorship candidate of our party in Rivers State.

“I want to announce to the world that I am in receipt of the name of a distinguished member of this party from Rivers State to the zone for ratification in the person of Worgu Boms, a former Attorney General of Rivers State. His name has been transmitted to my good office and I want to announce that in the earliest time possible, the South-South zonal executive committee will meet and ratify that name and send the same to the NWC of our great party.”

However, the leadership tussle of the APC in Rivers State worsened on Saturday when factions of Amaechi and Abe clashed over Giadom’s replacement.

Livingstone Weche, the media adviser to the acting chairman of the state APC, Aguma, said, “The National Working Committee requested Rivers State to submit a replacement and we have done so and they have accepted it and made it public.”

A former publicity secretary of the party in the state, Chris Finebone, told one of our correspondents that the position Boms was told to occupy was not vacant.

Finebone insisted that Giadom was now in charge of the party’s affairs at the national secretariat.

He said, “Maybe this is arising from Igo Aguma that he has submitted a nomination to fill the position; it is a long way to that situation.

“First and foremost, you know that it is impostors that decided to declare the seat of Giadom vacant. There is a subsisting court order which has made him the acting chairman of the party and for that court decision to subsist, it means that he’s a member of the National Working Committee.

“They are simply joking because the position is not vacant. Chief Victor Giadom is still in that position; he is only an acting national chairman based on the order of the court.

“So before you begin to talk of replacement, that is a different ball game altogether and we cannot talk about it because those who claim that they have made his seat vacant are impostors.

“Somebody like Hilliard Eta and all others are impostors and is even not in the calculations. So, there is no basis for him to claim to lead the National Working Committee to question the authenticity of Victor Giadom.”