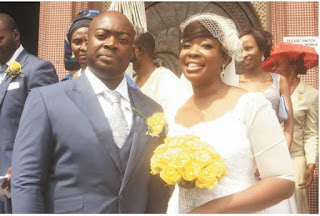 Energia Limited, one of Nigeria’s foremost indigenous exploration and production companies, is currently embroiled in a sex scandal.

At the center of this drama are the
managing director of the company, Leiste Aihevba and a female employee, Braibi Boma Horsfall. According to close sources, the two had been engaged in an illicit affair for a couple of years.

Olasunkanmi is the son of Brigadier-General Raji Rasaki (retd), the firmer Military Administrator of Lagos State, while his estranged wife is the daughter of Chief Albert Korubo Horsfall, the former Executive Chairman, Oil Mineral Producing Areas Development Commission (OMPADEC). The couple got married in January 2014.

Following his discovery, Rasaki fired a strong-worded letter to the chairman of Energia Limited, George Osahon. In the letter dated May 8, 2020, Rasak alleged that Aihevba had been having an unholy affair with his wife for years without his knowledge.

The letter is hereby produced below:

May 8, 2020
Dear Sir,
COMPLAINT ABOUT SEXUAL EXPLOITATION AND DEMAND FOR DISCIPLINARY ACTION AGAINST MR. LESTE AIHEVBA

I have recently become aware that Mr. Leste Aihevba (the managing director of Energia Limited) is engaged in an immoral and sexual relationship with my wife, Braibi Horsfall who is his executive assistant, despite the fact that they are both married.

By virtue of this relationship, it would appear that Ms. Horsfall has enjoyed some benefits which she would not be ordinarily entitled to, within Energia.

Though, I have instituted divorce proceedings, processes of which are hereby attached for your information, against them, I sincerely hope that this is not the corporate culture within Energia.

Nonetheless, I ask that disciplinary actions are taken against the erring parties; failing which I would need to resort to the appropriate legal processes to seek further redress, as I would not want such a culture shielded or covered up in a Nigerian company.

Energia Limited is one of Nigeria’s foremost indigenous oil exploration and production companies, operating a producing asset in the Niger Delta.