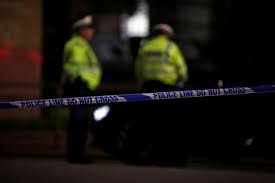 Several people were stabbed in the southern English town of Reading today, according to media reports, and the Telegraph newspaper said that three people had died.
As well as the fatalities, two more people were in critical care in hospital, the Telegraph said, quoting a source. It said police were treating the incident as a random attack.


Police said they had arrested a man at the scene and a number of injured people were taken to hospital.
Sky News said the stabbings took place at the site of Black Lives Matter protest in the town earlier in the day.
Police said they were investigating reports of an incident that the head of the local council authority said was serious.
Video footage posted on Twitter showed paramedics rushing to help at least three people who were bleeding on the ground in a park. Reuters was unable to verify the footage independently.
Britain's interior minister, Priti Patel, said she was deeply concerned to hear reports of the incident.
The head of the local council authority in Reading, Jason Brock, said police were dealing with a "serious incident" and he urged people to stay away from the town centre.
The National Police Chiefs' Council, representing senior police officers, urged people on Twitter to avoid speculation about the incident and to refrain from sharing of video or images of it.
Posted by MAN ABOUT TOWN at 3:11 PM