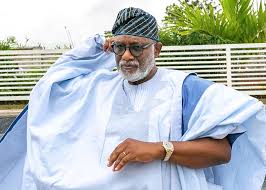 Ondo State Governor, Arakunrin Oluwarotimi Akeredolu, has reacted to a report making the rounds that he ordered the police to detain his deputy, Agboola Ajayi over his plan to decamp to another political party.

The Governor who expressed his reaction via his twitter account, described the report as total Misrepresentation of facts.

In his tweets "Total Misrepresentation of facts. I did not tell the government house security to hold him back at any point. Why would I? Agbo can go anywhere he likes. I wish him well."
Posted by MAN ABOUT TOWN at 10:47 AM