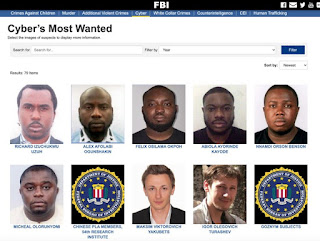 The Federal Bureau of Investigation (FBI) is seeking assistance in finding six Nigerians who the United States indicted for fraud.

The bureau took to its Twitter handle to solicit help in finding the six men who are wanted for “their involvement in ​business​ email ​compromise (BEC) schemes resulting in over $6 ​million in losses”.

“Help the #FBI find ​six Nigerian nationals wanted for their involvement in ​business​ email ​compromise (BEC) schemes resulting in over $6 ​million in losses,” it wrote.

It asked that tips on the matter should be submitted here.

The six Nigerians were identified as Uzuh Richard, who is said to spearhead the operation, Alex Ogunshakin, Felix Okpoh, Micheal Olorunyomi, Benson Nnamdi and Abiola Kayode.

TheCable had reported how the suspects aged between 32 and 37, “defrauded US citizens through the use of sensitive information and financial resources derived by manipulative means”.

The US department of treasury had said they were all indicted for romance scams.

Thecable
Posted by MAN ABOUT TOWN at 5:39 AM