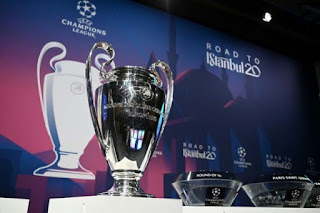 The assertion by Bild follows reports by several other European media in recent days. An official announcement is expected when UEFA’s Executive Committee meets by videoconference next Wednesday, June 17.
Bild also reported that the closing stages of the Europa League are set to be moved to Germany, with matches being played in the region around Cologne, in the west of the country.

This season’s Champions League final was scheduled to take place in Istanbul at the end of May before the competition was suspended in mid-March in the last-16 stage because of the coronavirus pandemic which has ravaged Europe.

The Europa League final was scheduled for the Polish city of Gdansk.

Four second-leg matches in the Champions League round of 16 are still to be played, with Juventus still due to host Lyon, Manchester City scheduled to play Real Madrid, Bayern Munich defending a 3-0 lead against Chelsea and Barcelona’s tie with Napoli poised at 1-1 from the first leg in Italy.

According to Bild, those matches could be played on the weekend of August 8 and 9 before the quarter-finalists move to the Portuguese capital.

Atletico Madrid, Paris Saint-Germain, RB Leipzig and Atalanta had all qualified just before the competition was suspended.

The Europa League faces a greater backlog, with only six of the last 16, first legs having been played, and none of the second legs.

Portugal’s credentials to host a Champions League mini-tournament are boosted by the fact that it has not been as badly hit by the pandemic as other western European countries, while it has no clubs left in the competition.

The Portuguese top-flight resumed at the start of this month, with matches being played behind closed doors.

Lisbon has several stadiums, including Benfica’s 65,000-capacity Estadio da Luz, which hosted the final of Euro 2004 and the Champions League in 2014, and the nearby 50,000-seater Estadio Jose Alvalade — home of Sporting — which was also used at Euro 2004 and for the UEFA Cup final in 2005.