Details As Keyamo Accuses Politicians Of Blackmail Over 774,000 Jobs 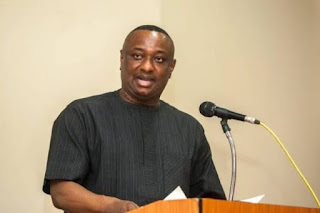 The Minister of State for Labour and Employment, Festus Keyamo has accused
some politicians of blackmailing and pressuring him into getting slots in the 774,000 jobs approved by President Muhammadu Buhari.

Keyamo, who made the accusation this while inaugurating the states’ selection committee of the project, on Monday however, vowed not to bow to such intimidation.

The 774, 000 jobs is aimed at creating employment for unskilled Nigerians which will last for three months.

Workers under the scheme would be paid 20,000 monthly.

However, the minister maintained that the job would be allotted to ordinary Nigerians.

According to Keyamo: “There has been an attempt at blackmailing us in this particular programme too to make us also yield to political leaders. But we have said no, not while I am here.

“Except Mr. President, who appointed and gave me the opportunity and rare privilege to drive this programme stops me, no other political leader or person can stop me. I am answerable only to Mr. President. This programme is for all Nigerians.

“Before coming here today, there has been an attempt by certain political leaders to say I must come and see them behind the scenes first to determine who gets what and how. I said no, I will not do that. I am ready at any time for a public debate on this with them.”