Laliga: There is room for Real Madrid to lose points - Barca coach 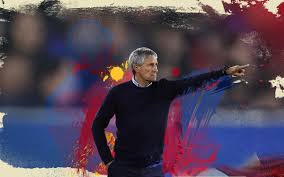 Barcelona coach Quique Setien said on Friday that he was certain Real Madrid will struggle to not lose any points before the league ends, opening the possibility for the Catalan club to take over the first position.
Barca thrashed Real Mallorca 4-0 on their return after the long break but looked in their 2-0 victory over struggling Leganes and last week they were held 0-0 at Sevilla, allowing Real Madrid to go top of the league on Sunday.

Although they defeated Athletic Bilbao in their last league match, Setien was a bit disappointed with the team's performance and in the news conference previewing their match against Celta Vigo he said that he expects difficulties.
With 68 points, Barca are leveled with Real Madrid but Zinedine Zidane's team superior head-to-head record keep them on the top the league.
Spanish media have been linking Barca midfielder Arthur Melo with Juventus as part of a deal to bring Miralem Pjanic next season.
Quizzed about that possibility, Setien said the Brazilian player is still part of Barcelona's squad and refused to talk about this topic.
Posted by MAN ABOUT TOWN at 10:56 AM