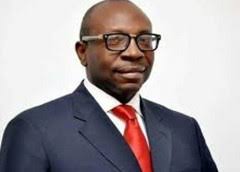 One of the governorship aspirants of the All Progressives Congress in Edo State, Pastor Osagie Ize-Iyamu, has emerged winner of the party’s direct primary conducted on Monday.
Chairman of the Edo State APC Primary Election Committee, Governor Hope Uzodinma, declared Ize-Iyamu winner of the election after collating the results turned in by the returning officers in the 18 local government areas of the state.


With the result, Ize-Iyamu will face other contenders in the September 19 governorship election in the state.
Posted by MAN ABOUT TOWN at 7:38 AM