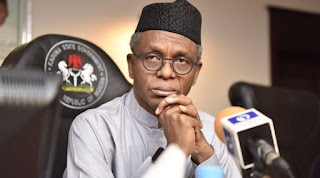 The Kaduna State Government has directed the immediate removal of roadblocks at the various boundaries of the state. Relevant state
government agencies are taking steps to implement this directive by dismantling and relocating the barricades that were placed at the various entry points into the state to help enforce the ban on interstate travel. Boundary patrols undertaken by state government officials as part of the quarantine regulations have also stopped forthwith.

These decisions are based on the recommendation of the State Taskforce on Covid-19 following a review of the situation the state boundaries, as the state emerges from partial lockdown. The state government has received reports of persistent extortion of vehicles conveying essential goods by some security officials, thus complicating an already challenging period.,
The State Taskforce on Covid-19 noted that the prohibition of interstate travel has been consistently implemented only when state government officials have been deployed to the entry points. While insufficient to stop the influx of persons, these exertions by senior officials were a necessary sacrifice to help reduce the chances of Covid-19 spread through interstate travel. Officials on boundary duty consistently reported at best lacklustre or perfunctory cooperation by security agencies in enforcing the interstate travel ban.
The Taskforce noted that while non-essential travel has been wantonly indulged at the state boundaries, there are reports of continued extortion by some security agents of vehicles transporting essentials goods. Clearly, the prohibition of interstate travel by the Federal Government as part of Covid-19 containment efforts has largely been observed in the breach by the people charged with enforcing it. Not only that, the conduct of such officials is also jeopardising the timely and cost-effective delivery of essential goods.
Therefore, the Kaduna State Government has directed that roadblocks at state boundaries be dismantled. Henceforth, the only roadblocks authorised within the state are those that are mounted to enforce the 8pm-5am curfew.
Signed
Muyiwa AdekeyeSpecial Adviser to the Governor (Media & Communication)15th June 2020
Posted by MAN ABOUT TOWN at 12:46 PM