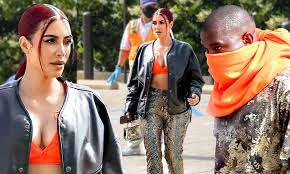 The Keeping Up with the Kardashians star, 39, has reportedly sold a $200 million stake in her cosmetics business KKW Beauty to the French beauty company Coty.

Due to the fact that one fifth of the company is valued at that amount, this means the entirety of KKW Beauty is believed to be worth $1 billion alone, excluding all of Kim's other business ventures.

This led to Kylie being estimated to be worth £1.2 billion, until Forbes magazine reported that she was believed to have 'forged' her tax returns and inflate figures, estimating her to be worth closer to $950 million than a billionaire

It would now seem that Kim is worthy of the title, however, and she would be joining her husband, rapper Kanye West, who was reported to be a billionaire earlier this year.

The pair have now been seen out on a date after leaving restaurant Nobu in Malibu together, according to the Daily Mail.

Kanye was wearing a golden camouflage sweater with black trousers and a neon orange hoodie around his face to protect himself and others from coronavirus, while Kim opted for snakeskin-print trousers, neon orange bralet and a classic black leather jacket.

Kim was mask-free for the outing and sported bright red locks for the date.

They soon climbed into Kanye's Lamborghini SUV as they made their stylish gettaway.

Nobu is renowned for its Sushi, so we hope they celebrated in fishy style that Kim is now the billionaire sister of the Kardashian-Jenner clan.

Meanwhile, Kylie previously hit back at accusations from Forbes that she had misrepresented her financial status.

The 22-year-old ranted on Twitter : "What am i even waking up to. i thought this was a reputable site.. all i see are a number of inaccurate statements and unproven assumptions lol. i’ve never asked for any title or tried to lie my way there EVER. period."

She added: "'Even creating tax returns that were likely forged' that’s your proof? so you just THOUGHT they were forged? like actually what am i reading."

"But okay i am blessed beyond my years, i have a beautiful daughter, and a successful business and i’m doing perfectly fine," she quipped.

She concluded by noting: "I can name a list of 100 things more important right now than fixating on how much money I have."
Posted by MAN ABOUT TOWN at 2:57 AM