I'll Meet Buhari Before Announcing My Next Move - Obaseki 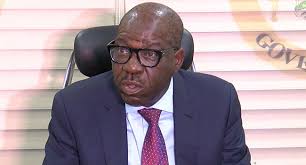 Embattled Edo State Governor Godwin Obaseki on Sunday said he will meet President Muhammadu Buhari before announcing his “next move”.⁣
⁣
A seven-member screening committee constituted by the ruling All Progressives Congress disqualified Obaseki from contesting in the party’s primaries billed to hold on June 22.⁣

⁣
He was disqualified on Friday over alleged discrepancies in his personal and academic records. His main challenger, Osagie Ize-Iyamu, was cleared.⁣
⁣
Obaseki has said he will not appeal the panel’s decision.⁣
⁣
On Saturday, the party’s national chairman, Adams Oshiomhole, said in Abuja that Obaseki had abused his powers as governor of Edo State.⁣
⁣
Political analysts and commentators had hinted that the governor might join the opposition People’s Democratic Party to avail him a chance to contest for a second term as the state governor.⁣
Posted by MAN ABOUT TOWN at 10:29 AM