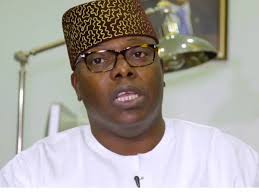 The last may not have been heard about the tussle over the Oniru Stool as one of the ruling houses in Iruland, the Omowumi Abisogun Oniru Ruling House has
called on the Federal Government to prevail on the Lagos State Government to reverse the installation of Oba Abdulwasiu Gbolahan Lawal as the new king. The Family staged a protest to the Igbosere High Court of Lagos on Monday where they out rightly rejected the installation of Oba Lawal, as the new Oniru of Iruland, saying that the decision should be reversed immediately and a true son of the Abisogun Ruling House be installed as the new king of Iruland. Lawal, a four time Commissioner for Agriculture and an ex-Aide-de-Camp (ADC) to Asiwaju Bola Tinubu was nominated and crowned as the 15th Oniru of Iruland within 72 hours last week, which culminated in the presentation of staff of office on Sunday, June 7. But the Omowumi Abisogun Oniru Ruling House has protested the decision, saying that Lawal is not a member of their family. A source in the Abisogun ruling family confirmed to Thepledge that the new Oniru of Iruland, Oba Gbolahan Lawal is the son of a princess in the Abisogun family and his father is of Ojora family. The source said it was pure injustice to the Abisogun family and best practices was jettisoned to impose Lawal on the family. The source said earlier last year, the family had conducted a thorough search for a viable candidate and the clear choice of the Abisogun family is Prince Hakeem Oriyomi Ajasa, a real prince of the family. Head of the Omowunmi Abisogun Oniru ruling house, 88-year-old, Alhaji Surajudeen Durosinmi told newsmen said they rejected Lawal because he is not part of their ruling house. The family tree shows that Lawal’s mother is from the Abisogun Ruling Family, but his father has his roots in Ojora family, another royal lineage in Lagos State. Efforts by Thepledge to speak to Hakeem Ajasa proved abortive as his telephone lines were switched off as at press time.