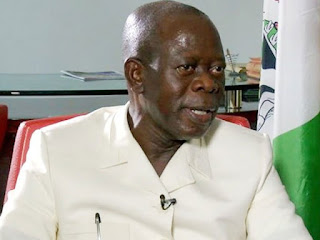 The National chairman of the All Progressives Congres, Adams Oshiomhole, has
announced that the Edo State Governorship primaries will proceed as planned.

Oshiomhole said this while speaking to reporters after the National Working Committee met with APC Governors in Abuja, on Monday.
He responded to a question that the Edo State Governor, Godwin Obaseki, had rejected the direct primary mode for his state, Oshiomhole told the reporter to “stop spreading rumours.”
He said, “Obaseki is not here but issues of primaries are well spelt out in our constitution and we are following it as strictly as positive. So, nothing to worry about at all.


“You are speculating (on Obaseki’s rejection of direct primaries), I don’t have any letter or document to that effect. These are very formal matters. Stop spreading rumours.”
The Chairman of the Progressive Governors Forum, Abubakar Bagudu, who also spoke to reporters, said that the meeting was held to discuss issues “affecting the party”.