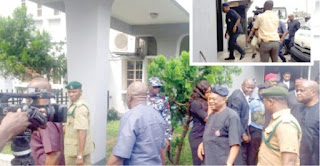 Orji Kalu, the Senate Chief is finally out of Kuje Prison.

He stepped
out of prison custody today – Wednesday, June 3, 2020 – 24hours after a High Court order that prison authorities should obey the supreme court judgment that quashed his  12years prison sentence.

The Supreme court on Friday, May 8, 2020, set aside the conviction of Kalu, who is a former governor of Abia State – and ordered a retrial of the N7.65billion allegation against him.

He, however, found it hard to ‘’process ‘’ himself out of prison system until he secured the high court order which demanded his immediate release from custody based on the ruling of the Supreme court

societynow.ng
Posted by MAN ABOUT TOWN at 1:49 PM