The Economic and Financial Crimes Commission has seized some properties said to belong to Governor Ayodele Fayose of Ekiti State. 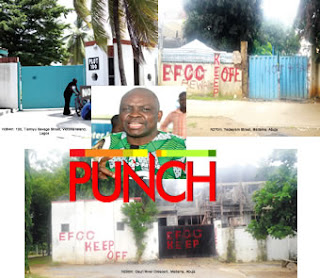 It was learnt that the properties located in the highbrow areas of Lagos and Abuja were seized as part of investigations into the N1.219bn the governor allegedly received from the Office of the National Security Adviser when Col. Sambo Dasuki (retd) held sway, through a former Minister of State for Defence, Musiliu Obanikoro, as well as some kickbacks he (Fayose) allegedly received from the Ekiti State Government contractors.

The anti-graft agency has also quizzed a former Secretary to the Government of the Federation, Chief Olu Falae, on his alleged role in the $15bn arms scam.
Falae was grilled by investigators at the commission’s office on Thursday.

Investigators told one of our correspondents that the seized houses belonging to Fayose were allegedly purchased with stolen funds and the EFCC invoked the Assets Forfeiture clause to seize the properties in line with Sections 28 and 34 of the EFCC (Establishment Act) 2004 and Section 13(1) of the Federal High Court Act, 2004.

The seizure came less than a month after the governor’s three Zenith Bank accounts were frozen by the anti-graft agency.

One of our correspondents, who visited two of the properties on 32 Yedseram Street and 44 Osun River Crescent, Maitama, Abuja, observed the inscriptions ‘EFCC, Keep Off’ on the fences.

According to court documents filed by the EFCC, the property on Osun River Crescent was bought by Fayose in the name of his London-based sister, Mrs. Moji Ladeji.
The governor reportedly pulled down the structure of one of the Abuja properties and started building a new one.

The two properties, which are uncompleted buildings, were said to be worth over N470m.
Sunday PUNCH learnt that the properties in Lagos were four duplexes located at Plot 100 Tiamiyu Savage Street, Victoria Island. The four duplexes cost $1.3m (N364m) each.
They were allegedly bought through a company, JJ Technical.

The EFCC had in a 10-paragraph counter-affidavit deposed to by Tosin Owobo accused Fayose of using the proceeds of crime to purchase properties.

The affidavit read in part, “Apart from fraudulently retaining the sum of N1, 219,490,000 being part of the N4, 745,000,000 stolen from the treasury of the Federal Government through the Office of the National Security Adviser, the applicant (Fayose) has also received gratification in form of kickbacks from various contractors with the Ekiti State Government such as Samchese Nigeria Ltd, Tender Branch Concept Nig. Ltd, Hoff Concept Ltd and Calibre Consulting Ltd.

“That the applicant (Fayose) also used the name of one Mrs. Moji Ladeji (the applicant’s sister) to acquire a property situated at 44, Osun Crescent, Maitama Abuja, from the proceeds of the alleged offences of receiving gratification and kickbacks.”
In his reaction, however, Fayose said all properties linked to him were not bought with stolen funds.

In a statement by his Special Assistant on Public Communications and New Media, Lere Olayinka, the governor said any property that might be linked to him or his company was “bought legitimately and his properties were duly declared in his assets declaration form and sources of such funds were not illicit.”

He said since the money he got for his election was from legitimate sources and not from the ONSA, “how the money was spent remained his own business and not that of anyone.”

Mrs. Oyin Daramola, an estate agent and owner of Still Earth Ltd, was quoted as telling investigators that she indeed sold the Victoria Island properties to Fayose. She said she rejected the idea of receiving payment through contracts.

Meanwhile, Falae, who was quizzed on Thursday by the anti-graft agency, had in February admitted to collecting N100m from a former Chairman of the Peoples Democratic Party’s Board of Trustees, Chief Tony Anenih, during the build-up to the 2015 presidential election.

The money was reportedly given to Falae to get his party, the SDP, to endorse the then President, Goodluck Jonathan, and campaign for him.

However, the N100m was said to have emanated from the imprest account of the ONSA domiciled in the Central Bank of Nigeria.

The money, which Falae got was said to be part of the N3.145bn transferred from the account of the ONSA to the bank account of Joint Trust Dimensions Limited, a company allegedly owned by the Director of Finance of the Goodluck Jonathan Campaign Organisation, Senator Nenadi Usman.

On Anenih’s instruction, Usman was said to have transferred N100m into a UBA account titled Marecco Nigeria Limited with number 1000627022, which allegedly belongs to Falae.

Others who allegedly received part of the fund were a former Minister of Aviation, Femi Fani-Kayode (N840m) and two former ministers, Achike Udenwa and Viola Onwuliri, who jointly received N350m in two tranches.

An investigator at the anti-graft agency told our correspondent that Falae was grilled for several hours and then allowed to go home on the condition that he would return in the next two weeks.

The source said Falae admitted to receiving the fund but maintained that he did not know that the money emanated from the ONSA.
However, investigators were said to have rattled the 78-year-old elder statesman with fresh facts.

A detective said, “Chief Falae came to our office based on an invitation. He told us the story of how he received N100m based on the instruction of Anenih. However, our investigations revealed that Falae only transferred N60m to his party, SDP.

“The remaining N40m was personally withdrawn by him, which means it was not used for campaign. When he was confronted, he started appealing to us that he did not want to be detained or taken to court, so we told him to go and bring the N40m first.

“He said we should give him some time, so we have given him two weeks to go and bring the money and then report back to us.”

Asked if the EFCC was willing to charge Falae having frozen his account, the detective said, “Chief Falae, is a former Permanent Secretary and Minister of Finance. There is no way he would not have known that the deal was shady.

“We are not victimising any political party or investigating the source of campaign funds. All we are doing is tracing the billions of dollars stolen from the ONSA account. Once you return the money, you will have no problem.”

Falae, while admitting in February that he collected N100m, had said, “It is true that N100m was given to my party to endorse and work for (former President Goodluck Jonathan’s candidature in the 2015 election. We used the money for that purpose and we effectively campaigned for the PDP since we did not have presidential candidate in the election. The money was not for me.

“With all the money PDP has and having spent 16 years in power, how would I have known that the money was from the arms deal? No reference was made to the arms deal. So, they should not bring me into the arms issue.”

Falae, while speaking to one of our correspondents on Saturday confirmed that he was invited by the EFCC. The elder statesman said he told the anti-graft agency that he didn’t collect any money from Dasuki.

He said, “It is true that I was invited by the EFCC and during the interrogation I told them that I didn’t collect money from Dasuki; that the money given to my party through Chief Tony Anenih was not given to me personally but to my party, the SDP.

“I explained to them exactly what I said in my interview in the newspapers.”

He, however, declined comment on whether or not he was asked to come back to the EFCC for further interrogation.