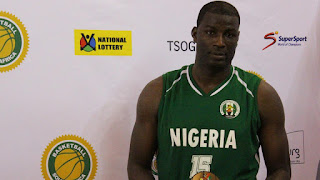 The Nigeria Basketball Federation (NBBF) has revealed that national basketball team captain, Olumide Oyedeji, opted out of the pre-Olympics training camp in the United States (U.S.) to take care of some important family issues.

He, however, assured that the African champions were working hard in camp to blend properly ahead of the Rio Olympics, saying that the team are training with the best facilities in the U.S.A

“The Basketball Federation has confirmed the absence of Oyedeji from the Olympics. He told the body that he would not be happy to give less to the team at the Olympics. We received the news with shock because his contributions have helped D’Tigers to win laurels in the past.
“We accepted his explanation and we can assure Nigerians that the team is working hard in America to be in top form ahead of the games. Playing against top teams like America, Argentina, and using the best facilities will surely help the boys to be in the right spirit. The coach will release the final list of the team after the training camp,’’ he said.
According to the team’s schedule, Nigeria will meet U.S. men’s team on August in Houston in one of the training matches before the Olympics.