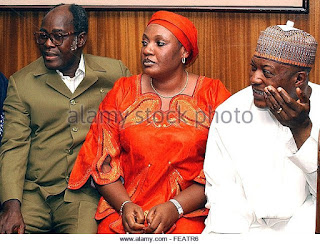 The nuisance of the tropics is the sheer necessity of the fizz and temperate region. Little wonder Enugu State governor, Ifeanyi Ugwuanyi, appointed an ex-convict into his cabinet, particularly at a time when the country is reeling and groaning under the weight of bad image and corruption.


Why would Governor Ugwuanyi, appoint ex-convict, Amaka Anajemba into his cabinet? Was it his way of showing appreciation and payback for some significant work done, or support in gaining entry into a powerful political clique controlling immeasurable wealth and authority? Or was it simply an outpouring of human kindness, reflective in the Christ-like injunction: “Go and sin no more?”

Whatever the truth is, Ugwuanyi’s appointment of Amaka Anajemba, a woman widely acknowledged as Nigeria’s Queen of 419 (Advanced Free Fraud), as the Managing Director of the Enugu State Waste Management Agency (ESWAMA), is ruffling a lot of feathers in the state. Since Anajemba’s appointment was announced on Friday, several civil societies and political interest groups have expressed dissatisfaction with the state government’s preference for a former jailbird and criminal mastermind.

Back in 2005, under the Olusegun Obasanjo administration, Anajemba bagged a prison term of two and half years for conspiring with others to commit a scam to the tune of $242 million in faraway Brazil.

She was convicted in July 2005 by Justice Olubunmi Oyewole of the Lagos High Court, Ikeja.
According to a news report in Daily Trust on July 26, 2005, “by her conviction, Mrs. Amaka Martina Anejemba, mother of four, became the undisputed Queen of the scam that continues to wreak havoc to our international image and integrity.”
Her conviction had earned a presidential recognition, with Obasanjo writing a letter of commendation to the EFCC boss, Nuhu Ribadu, for the first time, for a job well done in the successful prosecution
..thecapital