But for patronizing fate, Unoma Akpabio, the beautiful wife of Senator Godwin Akpabio would have suffered that short, transitory spasm which consequence manifests as death. Few days ago, Unoma evaded the long, cold clasp of death when she slipped into coma after a major surgery in a German hospital. 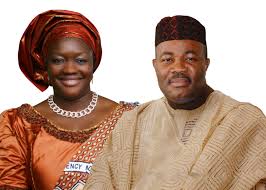 We are not sure if it was a cosmetic surgery or something else as the time of filling this report. But it was a major one.

Unoma, like most of her peer, was fooled by the glitter of mortal possessions. Had she died during the surgery, all her riches and name would not prevent her exit to yonder. She is definitely a lucky woman. Were it not for the merciful stroke of providence, Akpabio could be dead or fatally incapacitated by now. And all the Dollars, Euro, Naira and Pound Sterling in the world would be insufficient to save her.

Interestingly, however, it is an open secret that Akpabio’s wife, Unoma, nominated the new governor of Akwa Ibom. As Akpabio himself would later confess during the PDP governorship campaign inauguration in Uyo in the build up to the last general election, Udom was nowhere in the picture until he was recommended by his wife and first lady of the state then.

Akpabio, who on the occasion described Unoma as ‘Mother Theresa’ spared no adjective as he showered praises on her for spotting for him, a worthy successor in Udom. At the twilight of her husband, Senator Godswill Akpabio’s governorship of the state, Unoma excitedly suggested Udom to her husband as a worthy successor.