Umaru Shinkafi Dies In London, For Burial On Friday 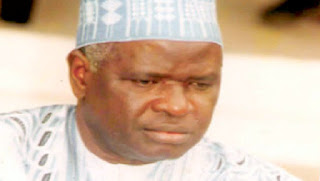 Mr. Shinkafi, who held the traditional title of Marafan Sokoto, was a native of Zamfara State.

He was a Federal Commissioner of Internal Affairs and a presidential aspirant in the third Republic. He also had an extensive career in military intelligence.

“The body will be flown back to Nigeria on Friday for burial at Abubakar III burial ground in Sokoto,” our source said.

Mr. Shinkafi is survived by three wives, and five children. One of his daughters is Zainab, wife of Gov. Atiku Bagudu of Kebbi State, and another is Hadiza, the wife of Zamfara governor, AbdulAzeez Yari.