Over 20 suspected Bakassi militants on Friday invaded the Cross River State Governor’s office in Calabar, apparently to express anger over alleged abandonment of the Bakassi returnees by the government. 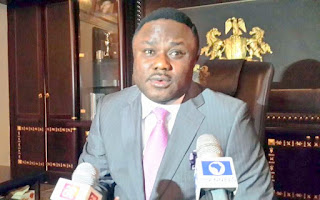 A source, who pleaded not to be named because she is not authorized to speak on the matter, said the suspected militants invaded the Government House at about 10am and for several hours held Mr. Esu and the staff hostage.

According to the source, the daredevil militants boldly told the people that they belonged to the Bakassi Volunteer Force.

It’s leader, who gave his name as “Capon,” boasted that his group were out to compel the government to release their monthly amnesty stipend, which has been withheld for several months.

He noted that the decision to stage the blockade was unanimously taken by the group to draw global attention to the deplorable way the Bakassi indigenes had been treated by the present administration in the state and country.

The Capon insisted that Bakassi people, who were displaced when Nigeria handed over their ancestral homes to the Republic of Cameroon, were being treated like slaves by government.

He explained that the group had in the past made several efforts to dialogue with the government but said the governor showed no interest in dealing with the problem facing them.

“Our people are dying hopelessly on a daily basis due to minor ailments that could have easily been treated. We have made attempts to dialogue with the governor several times but he would not give us audience and that is why we are here to demand our little stipend,” he said.

“We are from the Bakassi Volunteer Force, who have been neglected by government. Our people are dying yet the government is not doing anything. We decided to come out here today to let the entire world know what is happening so when we apply violence against the government nobody will blame us.

“Before the Bakassi Peninsula was handed over to Cameron, both the state and the federal governments benefitted from the proceeds of oil and other business activities from that place. After our homes were handed over, we are treated like strangers in our own land.

“If the federal government has rejected us, we won’t allow our own state too to reject us. We will shut down the governor’s office if nothing is done in the next few days.”

When contacted, the Chief Press Secretary to the Governor, Christian Ita, confirmed the invasion by the militants.

He said the group was there to express their plight to government but did not disrupt administrative duty.

He added that the state Security Adviser, Jude Ngaji, had addressed the aggrieved group while promising to contact the Amnesty office in Abuja.