This is the best of times for the children of the late former Minister of Power and Steel and ex-Governor of Ondo State, Dr Olusegun Kokumo Agagu with news that a huge discovery was made recently when the family was sanitising his bedroom. 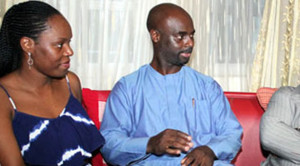 The politician’s Bodija, Ibadan home is said to
be the late politician’s vault where he kept his valuables while alive and the family didn’t really have the time to check the house based on the unfortunate circumstance that trailed the late politician’s death when the plane conveying his corpse from Lagos to Akure crashed and many sympathisers lost their lives.

The family were said to have checked the house recently and behold! Stuffed inside the late politician’s closet were wad of crisp notes in foreign currency which they didn’t know existed.

One of the late politician’s children, Feyi is said to have been making good of his share of the money with the acquisition of some properties in Lagos while he is presently making request into choice properties also in Ibadan.

Before his death, Agagu was a University teacher, Deputy-Governor, minister of power and steel, minister of aviation and later the Governor of Ondo State.