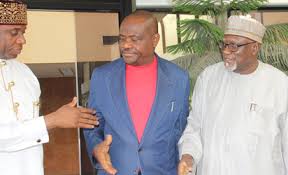 Why did the police and Department of State Service (DSS) meet with some of the leading political lights of Rivers State in Abuja on Tuesday?

The meeting, it was learnt yesterday, was informed because President Muhammadu Buhari is worried by the violence in the state.

The meeting was to facilitate the conduct of the senatorial rerun ordered by the Court of Appeal.

The Independent National Electoral Commission (INEC) has been unable to conduct the election since the order.

A statement in Abuja on Tuesday by the Police Spokesman Don Awunah, a Deputy Commissioner of Police (DCP), said the meeting was held in an atmosphere of mutual respect