There was setback for embattled Ekiti State Governor, Ayo Fayose, again on Monday as his attempt to de-freeze his personal account was rebuffed by the Federal High Court, Ado Ekiti. 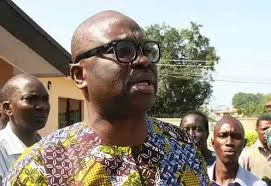 Fayose, under investigation for his part in the infamous N4.7 billion slush funds from the Office of the National Security Adviser (ONSA) under Col. Sambo Dasuki (retd.), had gone to court to force the Economic and Financial Crimes Commission (EFCC) to de-freeze the account domiciled with Zenith Bank Plc.

However, the Court sitting in Ado-Ekiti on Monday refused to grant his prayers,
adjourning the case to September 30 with no indication that the situation would change when the court resumes.

The EFCC, appearing at the suit for the first time, also filed a counter-affidavit against Fayose even as it submitted nine different exhibits to further strengthen its case against the governor.

The governor had approached the court seeking an order to de-freeze the account describing the EFCC action as a violation of his rights.

In what appears to be a sign of fresh trouble for Fayose at Monday's sitting, EFCC counsel, Oyedepo, brought more exhibits to the court apart from the counter-affidavits.

Oyedepo said: "We received the order of the court on 29th June direction us to appear and file counter-affidavit to show cause why the court should not set aside the freezing directive on the account in the custody of the 2nd Respondent.

"We have complied with Your Lordship's directive as a law-abiding agency by timeously filing 10-paragraph counter-affidavit and with nine different exhibits marked EFCC 01-EFCC 09.

"We have filed a counter-affidavits of 10 paragraphs with nine exhibits together with written address served on counsel to the Applicant and counsel to the 2nd Respondent.”

Replying, Ozekhome said: "My lord, I was just served three minutes before the court sitting started and I have not gone through the legal submission.

"Browsing through them, I can see that virtually all the issues raised by EFCC were issues never touched upon at all.

"We don't want to be caught by the cul-de-sac of the Supreme Court order that evidence note denied is deemed admitted.

"It is only reasonable and proper that we be given the opportunity to traverse and contradict every single thing they have alleged.

"That automatically means an adjournment which they have foisted on us.”

Justice Taiwo said the court would not be able to accommodate a short adjournment in view of an impending official assignment later this week and the commencement of annual vacation next week suggesting that a date after vacation will be convenient.

In the alternative, the judge explained that parties could take the case to any of the three vacation judges expected to sit at Abuja, Lagos and Port Harcourt during the period if they want the matter heard soonest.

Ozekhome said he would not want the matter transferred to a vacation judge because the action might be misinterpreted expressing the readiness of all parties to wait till after vacation.

Consequently, he adjourned to September 30 after due consultation with parties for hearing of all pending applications, motions and the substantive suit.

The EFCC in the course of its investigations uncovered how Fayose received funds for his election two years ago from Dasuki’s NSA through former mionsiter, Musiliu Obanikoro even though the governor has denied  this, arguing that that election was funded from a bank.

His associates, who have been arrested by the anti-graft agency, have already implicated him in their statements to the EFCC
Posted by MAN ABOUT TOWN at 10:08 AM