Why Senator Iyiola Omisore Is Still In Detention 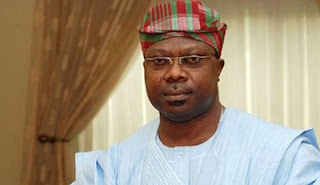 The EFCC gave details of its findings as regard how state’s funds were allegedly transferred to Omisore from the Office of the National Security Adviser (ONSA).


It said its investigation of Omisore’s alleged involvement in the diversion of state’s funds through the ONSA was still on-going and that it would need to hold on to the ex-Deputy Governor to prevent him from absconding.

An EFCC’s investigator, Kassim Yusuf, said these in a counter-affidavit the commission filed against an application for bail filed by Omisore before the High Court of the Federal Capital Territory (FCT), Abuja.


Yusuf, who stated that Omisore’s arrest and detention were backed by court orders, said the commission was planning to invite a number of the ex-Deputy Governor’s associates, who he named during interrogation.

He said the EFCC is ” investigating cases of alleged payments $ade by the office of immediate past National Security Adviser, Col. Mohammed Sambo Dasuki (rtd) to individuals and companies, with nothing to show for it.

“In one of the alleged cases which the 1st respondent (EFCC) is investigating, the name of the applicant (Omisore) featured prominently as a sole signatory to Firmex Gilt Ltd’s bank account domiciled at United Bank for Africa (UBA) Plc.

“A copy of a letter to UBA, forwarding signatory mandate card and statement of account of Firmex Gilt Ltd is hereby attached.

“Several payments were also made by the office of the immediate past National Security Adviser, Col. Mohammed Sambo Dasuki Trtd) into the bank account of Sylvan Menamara Ltd domiciled at Diamond Bank, with nothing to show for for it.

“Copies of e-payment schedules from ONSA and statement of accounts of Sylvan Menamara Ltd are hereby attached.

“From Sylvan Menamara Ltd’s Diamondaccount, the sum of N160,000,000 was deposited into the said account on 4th August, 2014 by the then NSA. Thus sum was subsequently transferred into Firmex Gilt Ltd’s bank account domiciled at UBA Plc on 8th August 2014.

“Investigation so far carried out, reveals that the applicant received hundreds of millions of naira from the office of the National Security Adviser, with nothing to show for it.

“In the course of interviewing the applicant, he has mentioned names of persons and companies through which monies from the office of the National Security Adviser got to him.

“There is need to those persons and companies mentioned by the applicant to make some clarification. If the applicant is granted bail, he will interfere with witnesses and he will also prejudice and frustrate our on-going investigation,” Yusuf said.

Arguing the counter-affiadvit yesterday, EFCC’s lawyer, Takon Ndifon argued that Omisore’s detention was not unlawful and did not amount to an abuse of his rights.

He contended that the fundamental rights enforcement suit initially filed before the court by Omisore, was merely intended to frustrate his investigation.

Ndifon stated that Omisore was invited by the EFCC on April 11, in relation to the investigation, but promised to honour the invitation on April 14.

“Instead of honouring the invitation in line with his rescheduled date of 14th April, 2016, he came and misled this court by obtaining an order of interim injunction restraining the 1st respondent (EFCC) from unlawfully arresting and detaining him without following the due process of law,” Ndifon said.

He stated that his agency, in compliance with the law, obtained a warrant of arrest and remand warrant “to keep the applicant in its custody for 14 days pending the conclusion of its investigation and the arraignment of the applicant in court.

Ndifon faulted Omisore’s claim to ill health, noting that he did not mention his ailment in his motion and that he also failed to establish that his purported ailment cannot be treated in the country.

“We further submit that, based on the applicant’s antecedent, if he is granted bail, he will abscond and he will never willingly present himself to the 1ts respondent for arraignment before any court of law.”

Omisore’s lawyer, Chris Uche (SAN) urged the court to grant his client bail. He faulted Omisore’s continued detention and argued that the court, having restrained the EFCC from arresting him, his current detention was illegal.

Uche also referred to his cleint’s ill health, which he said required that he be released from custody and allowed to attend to seek medical attention outside the country.