The Ministry of Sports has explained that it sanctioned the appointment of Chelsea star, John Obi Mikel, as Team Nigeria’s captain to the Rio Olympics because it was made to understand that the position went beyond the individual’s Olympic pedigree. 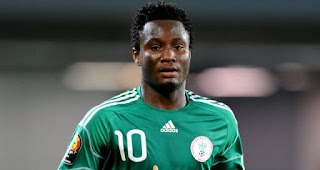 There has been uproar in some quarters over the choice of Mikel as captain when there are such Olympic veterans as Segun Toriola, Funke Oshonaike and Blessing Okagbare in the team. But a sports ministry official told
The Guardian yesterday that the uproar was unnecessary and capable of causing disharmony in the camp.

The official, who pleaded anonymity, said, “we were looking for someone that would be recognizable by every sports follower and in Team Nigeria nobody has such qualities better than Mikel.

“Sentiments apart, Mikel is one athlete that every sports lover, from China to the Bahamas, will easily recognise, so we chose him. It is purely for publicity purposes because we want to sell Nigeria to other countries at the Olympics.

“Toriola, Oshonaike and Okagbare have served Nigeria meritoriously and we recognise that. They are true patriots and we don’t think that not being the captain of the team would make them less patriotic.”
He dismissed the argument that Mikel would not be an effective captain since he will not be with other athletes at the Games Village, adding, “we have Oshonaike as the assistant team captain and she was picked for the position because she has the experience to do the job.
“The football team is not in the Games Village because of their schedule, but that does not mean that Mikel would not have any contact with the rest of the team. We plead that people do not say things that are capable of disrupting the harmony in the team.”
Meanwhile, Mikel has expressed his willingness to sacrifice for the success of Team Nigeria in Rio, saying he is overwhelmed by the decision to name him captain of the team. Speaking from the U23 team’s camp in Atlanta, Georgia, Mikel told thenff.com: “This is the highest accolade you can ever have as a sportsman‎ and it’s one I am really looking forward to.
“I am much pleased and very happy with myself for what I have been able to achieve, and grateful to the Federal Ministry of Youth and Sports and the entire country for this opportunity.

“My objective is definitely going to be to carry everyone along. I think it’s important that we all work together, it’s important that we all set one goal, and that goal is to be successful, to win medals, to make sure we get gold medals. Our country has not done very well in recent times at the Olympics, so hopefully we can go to Rio and do well.”

“If you look at my track record at Chelsea, I have always played for the team, I have always been a team player, I have never been an individual player, so I think this is something I will be carrying into the Olympics and carry into Team Nigeria to make sure that we are successful.”

On this being his first Olympics, the 29-year-old midfielder said: “I don’t think it will be a disadvantage. I think leadership is either you have it or you don’t. Sometimes, people grow into leadership and sometimes people are born with leadership qualities. I think I have always been in that leading role since my U-17 days, even when not wearing the captain’s band, I have always had people looking up to me to carry the team.”