‘’Engulfed In Crisis!’’..Trouble In Plateau State Assembly Over Tenure Elongation For Council Chairmen 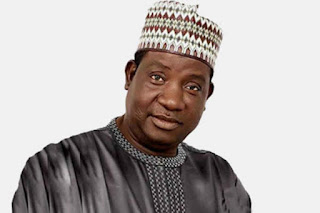 The Plateau State House of Assembly on Thursday witnessed a rowdy session as members of the Peoples Democratic Party protested the extension of the tenure of the transition chairmen of the 17 local government areas of the state.

Governor Simon Lalong had written a letter to the lawmakers, requesting that the tenure of the local government transition chairmen be extended by six months, instead of the original two months.
The chairmen were appointed following the sacking of the chairmen who were elected into office by former governor Jonah Jang.

But the 10 PDP members, led by the Deputy Speaker, Mr. Yusuf Gagdi, protested the move, saying that it was against the agreement reached with the lawmakers when the chairmen were elected last year. He said that the chairmen’s tenure had been extended by two months in the former exercise since they were appointed earlier this year.

At the plenary on Thursday, the Speaker, Mr. Peter Azi, after reading the communication from Lalong, said that the governor had reasoned that the extension of the tenure of the management committees’ chairmen of the 17 LGC to six months would make for stability and allow them to be focused.

The contributions, however, turned rowdy as all the 10 PDP members vehemently kicked against the extension by six months and insisted that based on the earlier agreement, it should be extended by just two months and also subject to the performance of the chairmen in the past months.

In his contributions, Gagdi, representing Kantana Constituency on the platform of the PDP, disclosed that the House was in the receipt of 11 petitions against the management committees’ chairmen, adding that if they were doing well, there would be no petitions against them.

He pointed out that the allegations consisted of massive corruption levelled against the chairmen, stressing that their tenure should not be extended more than two month.

But his position was countered by the Member representing Jos North, North Constituency under the All Progressives Congress, Mr. Ibrahim Baba Hassan, who urged the House to consider the six months tenure extension to pave the way for proper planning of local government  polls in the state.

As the Speaker was about to subject the motion to a vote, the 10 PDP lawmakers walked out of the chamber in protest while the 14 APC members voted in support of the six months.
All efforts to persuade them failed.

Speaking to newsmen, Gagdi described the action of the APC lawmakers as unconstitutional, as they did not form two-third majority as stipulated by the constitution