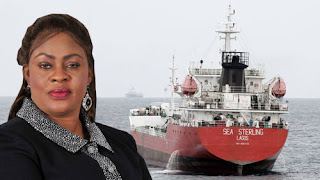 SaharaReporters has exclusively obtained shipping and merchant vessel documents which show that the disparaged former Minister of Aviation Stella Oduah purchased and registered an oil tanker a few months before she was sacked by former President Goodluck Jonathan.


It will be recalled that Mrs. Oduah, now the Senator from Anambra State, was sacked by Mr. Jonathan in February 2014 following a series of exposes from SaharaReporters connecting her to a massive BMW vehicle scandal. In recent days, the Economic and Financial Crimes Commission (EFCC) discovered that N2.5 billion was put in a bank account under the name of Mrs. Oduah’s housemaid.

The EFCC said “Senator Oduah apparently opened the account with her housemaid’s name, image, and details without the housemaid knowing about it.”

This latest scandal, which involves the unexplainable purchase of a massive oil tanker, is connected to Mrs. Oduah’s company Sea Petroleum and Gas Company Ltd. This company purchased the vessel SEA STERLING, with call sign 5NXF, and later registered it in the Port of Lagos.

According to the Certificate of Classification, by the International Classification Society, the SEA STERLING was certified and entered in to the Bureau Veritas Register Book as having unrestricted navigation.

The vessel, also listed as an Oil tanker on the classification document, was stated as being owed by Sea Petroleum and Gas Company Ltd with a Nigerian flag. It was given the registration number 14565J and valid until May 23rd 2017.

The certificate was issued on August 26th, 2013 at Lagos and later obtained compliance and insurance accreditation in September 2013.

Mrs. Oduah’s oil tanker, affixed with the International Maritime Organization (IMO) number 9607318, is said to be able to freight 4,126 gross tons. SaharaReporters found that on August 26th 2014 the Sea Sterling was attacked by pirates off the coast of Bayelsa State but were repelled by security onboard.

A SaharaReporters investigation into the vessel found that it was built in 2012 and is 112 meters long.

One maritime expert, who SaharaReporters provided the specifications of Mrs. Oduah’s oil tanker to, told our correspondent that “a 6,000 dwt [dead weight] product tanker built in 2009 was recently sold for $12.2 million. So a similar sized tanker built in 2012 [like Stella Oduah’s] would probably be valued between $13 and $15 million.”

He added that, “this assumes a willing buyer and a willing seller and also depends on the vessels’ condition and the shipyard it was built.”

Mrs. Oduah was not immediately available for comment on how her company was able to afford this oil tanker


..Sahareporters
Posted by MAN ABOUT TOWN at 5:02 AM