The Amnesty Boss,Who Claimed To Have Relocated To The Creeks Was Only Sighted In Tompolo’s Community With Cladestine Meetings, Niger Delta Elders Claim 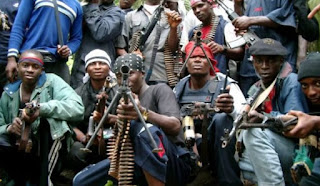 Notable elders and traditional rulers from Bayelsa State, Saturday, told President Muhammadu Buhari that some of his aides were frustrating the proposed peace talks between his government and the militant group, the Niger Delta Avengers (NDA).

The elders who eulogized the President for taking a decision to lead the dialogue, however, said discordant tunes among presidential aides created doubts in the process.

They said the avengers became skeptical of the dialogue following signs of deceit, fraud and disharmony among the aides.

The elders under the auspices of Bayelsa Elders for Progress, Peace and Good Governance (BEPPGG) led by their Coordinator, Chief Ayibatonye Goodnews and ‎Secretary, Chief Lucky Ebifaghe, wondered why attacks on pipelines had continued despite dialogue and ceasefire.

They alleged that the recent activities of key aides from the region including the Minister of State for Petroleum, Ibe Kachichukwu and the Coordinator of the Presidential Amnesty Programme (PAP), Brig. Gen. Paul Boroh, were frustrating the peace efforts of the Federal Government.


The concerned elders, in an open letter to the President said: “President Buhari should investigate the genuiness of purported meetings held between the Presidential Amnesty Boss, Paul Boroh and Dr. Ibe Kachichukwu.

“The Amnesty Boss,who claimed to have relocated to the creeks of the region was only sighted in Tompolo’s community with cladestine meetings without solution to the continued bombing of the Oil and Gas facilities.

“Buhari should investigate the money expended on the jamboree without result. We insist that the Presidential Amnesty Office should be probed following the alleged failed sharing of resources to fake avengers.

“The lack of knowledge on key issues of the region and wrong signals sent to militants ‎along the creeks are frustrating the needed peace process. Many of the purported stakeholders have made money from the self created jamboree in the region. Genuine Niger Delta Stakeholders should be consulted for sustained peace.”