Conor McGregor Retires From UFC At 31 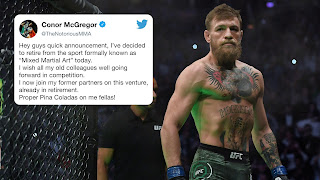 News of Conor McGregor, who says he is retiring again from UFC has emerged online.

The Irish former featherweight and lightweight champion tweeted the news following the conclusion of the UFC 250 event.

McGregor, who leaves with a record of 22 wins and four losses - posted an emotional goodbye message on his Twitter account this morning.

It is not the first time the Irishman has claimed he is hanging up his gloves, and it is not known whether this will be his final farewell.

"Thank you all for the amazing memories! What a ride it’s been!

"Here is a picture of myself and my mother in Las Vegas post one of my World title wins!

"Pick the home of your dreams Mags I love you!

"Whatever you desire it’s yours."

This is the fourth time he will be claiming retirement.
Posted by MAN ABOUT TOWN at 3:09 AM