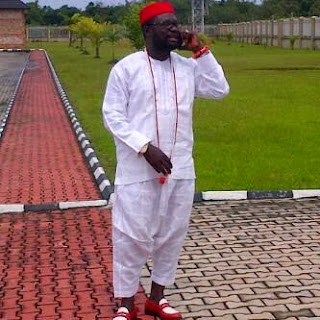 And he perfected this by adopting an out of the ordinary measure
- he moved out of his area of influence, Warri, Delta state.

Holder of self professed title of pride, The akulagba 1 of Warri is now virtually a permanent fixture at his Lekki, Lagos home.

Occasionally he is confirmed as 'doing brief spells' in Abuja.

Sources confirmed the Lagos residency he has taken upon himself and time outs to Abuja are without his money gulping traditional extravagance and funfair.

The Akulagba is said to be experiencing a bad batch of business and influence.

And movements out of known zones and antics that keeps him of public glare are identified as ' cover up' measures.

Naijacelebrities.net learnt that Ayiri's problems stem from moves by others under his grow to assert their independence.

Informants disclosed they did this by attacking Ayiri's businesses - protection of petroleum facilities.

And his personal businesses as well by putting blockades on attempts by him and his associates to lift crude.

Sources confirmed his former 'boys' have priced away virtually all oil firm under his protection. And at present are on the verge of knocking off his cash cow- the official arrangement with the Federal Government.

Insiders claim with his loss of control of certain clients over superior show of power by his former under linings, the lavish spender has been portrayed as 'no longer capable'.

And the money spinner arrangement with the Federal Government was based on perception he had things under control.

The government arrangement to protect certain facilities runs out in April 2014- they are talks it may be renewed in favour of another person based on new developments.

Unconfirmed sources claim his movement away from his base had to do with threats against his person and those he cares about, with his absence now being used as a campaign point of his loss of standing.

This development is now tagged ' a big blow' to his image of the man in charge.

How the man credited with doling out alluring automobiles to friends and hangers on as a past time execute a relaunch to former celebratory status remains to be seen
Posted by MAN ABOUT TOWN at 2:49 AM