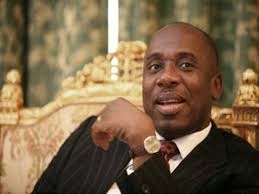 The attackers described as wearing mask reportedly shot at venue of an event by state Government officials.

The incident comes barely a week the state police command is accused of disrupting a similar event.

Just like the initial disturbance, the fresh action recorded casualties
.
Here is a full detail of the report sources by societynowng.com

Gunmen suspected to be militants just attacked another rally sympathetic to the cause of Governor of Rivers state, Rotimi Amaechi.

'HOODLUMS suspected to be militants on Sunday invaded the Save Rivers Movement rally in Bori, Khana Local Government Area and unleashed terror on members of the group.

The militants, who wore masks were said to have  shot sporadically mostly at  vehicles parked at the venue of the event by state government officials.

The  Secretary to the State Government, Mr. George Feyii, the Chief of Staff, Government House,  Chief Tony Okocha, and some journalists were among those that  escaped death by a whisker.

Some  however sustained serious bullet injuries during the incident that occurred  barely  a week   after a similar rally was disrupted by operatives of the Rivers State Police Command in Obio/Akpor Local Government Area.

'Okocha was also lucky during the Obio Akpor rally  but a pro-Rotimi Amaechi senator, Magnus Abe, was not as he was shot with rubber bullets by policemen. Abe  is currently in a London hospital receiving treatment.

It was learnt that during the latest  incident, the  militants, who  besieged the All Saints Anglican Church venue of the  rally, had   begun  shooting  within Bori around 4.30am on Sunday.

They (hoodlums) however  marched to the open field and fired at the parked vehicles at about 10. 40am, forcing the SRM members to flee.

The first group of militants arrived  wielding cutlasses while the second group came in later, wearing masks and shooting intermittently with sophisticated weapons.

'However, the absence of security operatives at the  venue made the attackers to have a field  day.

Channels  Television crew members  that were on the ground to cover the event had the windscreen of their Outside Broadcasting Van smashed.

The SSG’s bullet-riddled   Brilliance saloon car  was  seen being  driven out of the venue of the rally.

A government official said they had to run into the bush  when they saw a group of masked  militants arriving  the venue.

He said, “Immediately they came close, they started  shooting    at some of our  vehicles. Some of us would have died if we had not taken the decision to run into the bush.”

Okocha told  journalists that his personal  security aides  and those of the SGS rescued  them.

Channel’s reporter, Grace Ekang, said she was “traumatised by the incident.”

“They (hoodlums) were shooting seriously; they attacked us and the first group that came stole our big camera,” Ekang lamented.

'At Bori, policemen mounted roadblocks and barred journalists from gaining entry into the scene of the incident while motorists were forced to take longer routes to their destinations.

Governor  Amaechi, who later inspected some of the  damaged government and Channels Television vehicles, lamented the security situation in the state and described President Goodluck Jonathan’s government as being  worse than Sani  Abacha’s.

Amaechi said   that democracy was in danger  in the country with the insecurity in the state  and added that the State Commissioner of Police, Mr. Joseph Mbu, had  declared war on his administration and the people of the state.

He accused Mbu of being part of the   attack on SRM supporters,   maintaining that the Federal Government was desperate to win the 2015 elections.

'The governor said, “There is  a serious danger for democracy because what you are seeing here is close to what Abacha was doing.

“This is  worse than  the Abacha  government. Here, people are being shot. This is worse because even governors were not arrested under Abacha.

“We heard Mbu called a meeting at the police officers mess and declared war on the Rivers State Government and Rivers State people. He is determined to ensure that they are not protected. He  warned policemen in the state   in advance not to protect anybody at the rally.

“The interpretation of this is  that he knew that there  was  going to be an attack and he must have been part of the process of the attack.  If he did not, then when the people started shooting  around  4am, what did the police do?

“It shows how desperate the Federal Government is to win 2015 election. As the governor of Rivers State, if you hear gunshot from 4am, we will seek protection from that 4am; we will go and look for those who are shooting from 4am to 6am.

“They attacked  pressmen and the Commissioner of Police did not care.    I heard two persons are lying critically ill in the hospital.

“The lives of our  people are not being protected because he (Jonathan) sent a police commissioner through his   wife to pursue an election that is one year away.”

Amaechi,who  vowed that botched  Sunday rally  would be held on Saturday, promised  to be at the venue.

'The  state Police Public Relations Officer, Mr. Ahmad Mohammad, said though he received report of the attack,  he was not aware that anybody was injured.

Mohammad pointed out that the  police were not notified about the  SRM rally.

He said,“From the report I received, there was an attack on the SRM rally in Bori. Nobody said that anybody was injured.

“But the gathering by the group  was without police notification. Nobody notified the police that there would be a rally in Bori.”

'Meanwhile, the Supervising Minister of Education, Chief Nyesom Wike,  has boasted that  Amaechi would never rest unless he resigned as the state governor.

Wike, who spoke at a  rally organised by the Grassroots Development Initiative in Degema on Sunday , described the All Progressives Congress as the enemy of the state.

He called on any group supporting Amaechi to learn from the GDI by obtaining permission from the police before embarking on any rally.

The minister said that Jonathan had good intentions for the people of the state  and hence the  appointment of a Chief of Army Staff  from the state'
Posted by MAN ABOUT TOWN at 12:57 AM