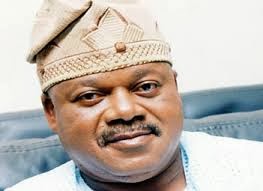 Amusan a member of rival political party, PDP recently had
the fence of his campaign office pulled down by officials of Ogun state government.

Here is a fuller report of the development

'A governorship aspirant for the Peoples Democratic Party in Ogun State, Kayode Amusan, has alleged that the demolition of the perimeter fence of his campaign office in Abeokuta on Monday was politically motivated.

Amusan, a former House of Representatives member, said this in his reaction to the pulling down of the fence of his campaign office by officials of the state Bureau of Urban and Physical Planning in Abeokuta.

Monday’s demolition was the second time such an exercise would be carried out on the structure. The first one was done in 2014.

The state Commissioner for Information and Strategy, Alhaji Yusuph Olaniyonu, however argued that the structure was demolished because it contravened the law.

A team of BUPP officials had at about 10.20am stormed the PDP aspirant’s campaign office, situated along Oba Gbadebo Road, Oke-Ilewo, Abeokuta, in a vehicle marked OG 06 836, and pulled down the structure.

'They were said to have declared that the structure was not approved.
Amusan, however, told newsmen on the telephone that the BUPP did not have the right to carry out such demolition.

He added that he bought the building from the Federal Ministry of Housing.

The PDP aspirant claimed that the erection of the perimeter fence became necessary due to the dumping of fetish objects in the premises by some unknown persons.

Amusan insisted that the demolition of the structure was part of the strategy by the ruling All Progressives Congress in the state to intimidate him out of the 2015 governorship election.

The former lawmaker said, “It (demolition of the structure) is more of intimidation but nobody can intimidate me from the race. I am going to contest the governorship election.

“That land belongs to the Federal Government. As at the time we bought the land, we have submitted approval to the Federal Ministry of Housing about five months ago and then they sent it to the state Urban and Physical Planning for them to accede to it. I’m surprised they resorted to this kind of action. They have no right over the place at all.

“You can’t expect me not to fence my building. In fact, only yesterday (Sunday), somebody came to bury a whole leg of cow there. You can imagine. But no matter what, I will contest the election. Nobody can force me out.”

But Olaniyonu criticised the PDP governorship aspirant for allegedly attempting to “cash in” on the political situation in the state.

He claimed that Amusan erected the perimeter fence on the road setback while also ignoring the stop-work notice earlier issued him by the BUPP.

The commissioner added that the aspirant did not get approval for the perimeter fence he erected.

“They are all just trying to cash in on the (political) situation. He (Amusan) is building on the setback and he has no approval and it has been marked since. They knocked it down so that he would not continue to waste his money. He ignored the order and stop work notice. What he should do now is that he should move inwards and also apply for approval,” he said'
Posted by MAN ABOUT TOWN at 12:57 AM