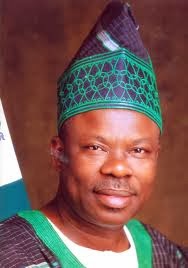 Fellow party members and federal law makers on the platform of the All Progressives Congress have accused Ogun state Governor, Ibikunle Amosun of plot to unleash mayhem on the party's rally scheduled for Tuesday January 21 2014.

The governor is locked in an intense battle with party officers on how to secure nomination for re election.

Eight people were shot at an open meeting held in the state (Wasimi Market Square, Ewekoro) by people suspected to be against the re election interest of the governor.

The governor was accused as the sponsor- he died it.

The law makers claim the latest cry out and attempt to nib a reoccurence of violence at the party's gathering in the bud.

Here is a report of the latest twist as sourced from the punch.
'The All Progressives Congress federal lawmakers from Ogun State on Sunday raised the alarm over an alleged plan by Governor Ibikunle Amosun to use thugs to disrupt the party’s rally scheduled for Tuesday and turn round to blame it on them.


Three senators, including Gbenga Kaka (Ogun East), Gbenga Obadara (Ogun Central) and Akin Odunsi (Ogun West) and the seven members of the House of Representatives, in a joint statement made available to newsmen in Abeokuta on Sunday, alleged that the governor planned to use his supporters to disrupt the APC rally slated for Tuesday and turn round to accuse them of carrying out a reprisal over Thursday’s shooting incident in Wasimi.
The National Assembly members therefore appealed to the relevant security agencies to prevent the plan to soil their names.
The lawmakers, who described themselves as “harbingers of peace and progress,” said they were not in any way opposed to the planned rally by Governor Amosun.
They noted that in spite of last Thursday’s attack on them and their supporters at Wasimi in Ewekoro Local Government Area of the state, they remained ardent believers in politics without bitterness.
The National Assembly members’ statement reads, “It has come to our notice that Governor Ibikunle Amosun has scheduled a rally for Tuesday, January 21, 2014. While we are not averse to his rally, we have been reliably informed that he plans to have some of his hoodlums masquerade as the opposition and cause disruption of same so as to claim that it was a reprisal.
“Although the disruption of the meeting held at Wasimi on January 16, the attack on our lives, those of our aides and party members left us abused and hurt, we do not believe in politics with bitterness since an eye for an eye policy would soon make the whole world go blind.
“Despite all these, we have no intention whatsoever to disrupt Governor Amosun’s rally.
“Consequently, we are calling on all security operatives to join forces and put all hands on deck to prevent the perpetrators of this evil act … which the governor has put in place to soil our good names …”
Similarly, another member of the House of Representatives, Abiodun Akinlade, has accused Governor Amosun of being desperate to retain the state’s governorship office in 2015.
'Akinlade, representing Yewa South/Ipokia Federal Constituency, made the allegation while reacting to the recent spate of violence that had attended the activities of the APC in the state.
Efforts by our correspondent to get the reaction of the state Publicity Secretary of the APC, Alhaji Sola Lawal and the Commissioner for Information, Alhaji Yusuph Olaniyonu, proved abortive.
Lawal and Olaniyonu neither picked the calls to their phones nor replied the SMS sent to them.'
Posted by MAN ABOUT TOWN at 2:20 AM