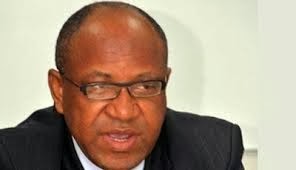 A branch manager with financial institution Eco Bank is striving to entangle herself from an arranged business deal gone bad.
The bank manager reportedly acted as link person in the transaction  now labelled a fraud.

And here is a reproduction of his case with Eco bank manager, Nwokocha.
'A disappointed customer of Ecobank Nigeria Plc, Mr. John Ahunu, is currently at loggerheads with the Chevron branch manager of the bank, Mrs. Florence Nwokocha and another customer of the bank, Mr. Muhammed Buhari, for allegedly duping him of the sum of N20 million, in a false transaction deal dubiously packaged as an investment opportunity.

Ahunu said he was convinced that Nwokocha connived with Buhari to defraud him of the amount.
Buhari, a United Nations Millennium Development Goals ambassador and a member of the MDG Committee, West Africa, was allegedly introduced to Ahunu by Nwokocha in 2012.
A petition by Ahunu’s counsel, Mr. Johnson Anumudu, to the Inspector General of Police, and dated August 1, 2013, alleged that Nwokocha had a personal relationship with Buhari.


'Punch Metro that after the petition was received, the case was transferred to the Special Fraud Unit by the Deputy Inspector General of Police, Force Criminal Investigation Department, Abuja.
Speaking with our correspondent, Ahunu said, “I got to know Nwokocha after opening a fixed deposit account with the Chevron branch of Ecobank to deposit some money I made from the sale of a house.
“A few days after the proceeds from the sale were paid into my account, Nwokocha invited me to the bank and introduced Buhari to me. She told me that he was a businessman and needed some money to finance oil supplies. She assured me that Buhari was genuine and that I would get an interest of six per cent after two weeks if I loaned him the money.
“Being a branch manager, I didn’t suspect her of anything. I signed the transfer funds that would make her hand the money over to Buhari. But two weeks after, I received neither the capital nor the interest promised. When I tried contacting Buhari, he refused to pick his calls. When I couldn’t get my money back, I contacted a lawyer to petition the police on my behalf.”
It was learnt that following an investigation by the SFU, Buhari was arrested and later released on bail.
Although both men were said to have eventually reached an agreement about the payment at the SFU, Ahunu said he had yet to receive anything from Buhari.
However, Buhari’s counsel, who identified himself simply as Mr. Nicholas, denied the fraud allegation and instead described it as a business deal gone bad.
He said, “This whole thing between Ahunu and Buhari is simply a business transaction that went bad. Buhari was to execute an oil transaction and got a loan from Ahunu.
“A third party, also involved in the transaction, was to get an ISPO from a bank which was meant to guarantee the payment. Nwokocha had verified the letter as genuine and Buhari went ahead with the business only for the bank to renege on their agreement. They said the officer who signed the ISPO was not meant to do so.
“Everything fell apart from there. The products that had already been purchased could no longer be discharged. Buhari lost a lot of money, so it is not as if he deliberately refused to pay back Ahunu his money.
“There was a time Buhari was even arrested by the SFU over this incident but both parties eventually signed an agreement and the matter was moved out of SFU. There is no question of a scam or fraud in this matter.”
When Punch Metro contacted the SFU Public Relations Officer, DSP Ngozi Isintume-Agu, she said, “This case was handled by our Financial Malpractice and Investigation unit over a year ago.
“The suspect in this case is Buhari; all Nwokocha did was to introduce both parties to each other. We arrested Buhari and later granted him bail. The matter is still under investigation.”
A statement from Ecobank’s Brand and Communication Department denied Nwokocha’s complicity as a branch manager of the bank.
It read, “This is an unfortunate case involving two customers of the Bank in 2012, who appear to have had a private transaction. We sympathise with Ahunu, but unfortunately, we cannot interfere as the transaction was between two parties and the bank was not privy to same.”

Mr. Jibril Aku is the Managing Director of Ecobank Nigeria, the pan African bank.'
Posted by MAN ABOUT TOWN at 1:58 AM