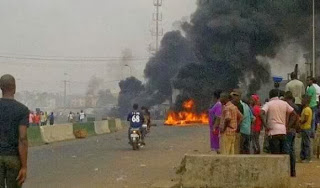 A truck belonging to Dangote Cement owned by billionaire business man, Alhaji Aliko Dangote was the cause of a major incident in Onitsha.


Here is a trending report of the episode

'There was a protest on Wednesday morning in Onitsha, Anambra State following the killing of a man of Igbo extraction by a driver in the fleet of Dangote Group of Companies.

The truck in the Dangote fleet was said to have crushed the man in the early hours of Wednesday.

This resulted in the setting ablaze of the trailer by an irate mob.

'The accident occurred in Upper Iweka Road in the commercial city.
Some men, suspected to be members of the Movement for the Sovereign State of Biafra are said to have taken over the protest.

The suspected MASSOB members are reported by a citizen reporter to be after people of northern extraction on whom to take their pound of flesh since the driver is from the North.

It was learnt that a police team has been drafted to the area to restore law and order'
Posted by MAN ABOUT TOWN at 3:39 AM