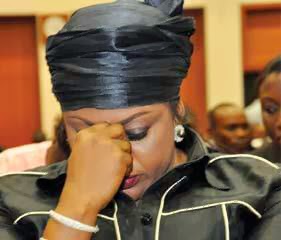 The presidential committee set up to probe the N255m bullet proof car acquisition scandal with aviation minister, Stella Oduah at the centre has indicted the embattled minister.

This comes just as breaking news and confirmation of certificate forgery against the controversial minister hit town.


Here is a link to the certificate mess

Here is a reproduction of peep into the presidential panel's findings.

The committee set up by President Goodluck Jonathan to probe the N255m bulletproof car scandal in the aviation ministry has indicted the Minister, Ms. Stella Oduah.

It was gathered  in Abuja on Sunday  that the report of the presidential committee tallied  with some findings of the House of Representatives  Committee  on Aviation on the scandal.

In October, there were reports that with the approval of the minister, the Nigerian Civil Aviation Authority purchased two bulletproof  BMW cars at an allegedly inflated rate of N255m.

The development sparked a countrywide controversy with  many Nigerians and groups  calling  for her sacking.

The House  subsequently mandated its Committee on  Aviation to probe the allegation against the minister.
On  December 19, 2013, the House endorsed the report of its   committee and agreed that the minister breached the 2013 Appropriation Act.
It therefore asked Jonathan to review Oduah’s  appointment for approving expenditure of over N643m for the NCAA  to procure 54 vehicles last year.

The spokesperson   for the House, Mr. Zackary Mohammed, had explained that the lawmakers wanted the minister sacked.

He said, “The word  ‘review’ here means a change in status. It is a mild way of saying that Mr. President should sack the minister.”

A major recommendation of the  Aviation committee, which was adopted, reads, “The House urges the President to review the continued engagement of the Minister of Aviation, Stella Oduah, for having contravened the Appropriation Act, 2013 and the approved, revised thresholds by exceeding the Ministry of Aviation’s approval limit of N100m by the purchase of 54 vehicles valued at N643m.”

Although Jonathan confirmed the receipt of the report of the presidential committee chaired by a former Head of Service of the Federation, Alhaji Sali Bello, he had yet to make a pronouncement on it.
Other members of the presidential panel included the National Security Adviser, Col Sambo Dasuki and Vice-Marshal Dick Iruenabhere.

It was learnt on Sunday that the   panel, like that of  the House, also discovered that the minister’s approval for the cars exceeded the N100m limit.
A top government source, who disclosed this to The PUNCH on Sunday, said   although the committee indicted Oduah , it did not say whether she should be sacked or not.

But sources told The PUNCH  that there was every likelihood of the President using the    cabinet shake -up that would follow the presentation of his ministerial list to the National Assembly to relieve himself of the moral burden of Oduah’s continued presence in his government.

One of the sources   said Jonathan did not take any action on the matter when the issue was raging last year because it was not in his character to be seen as being stampeded into taking any decision.

He said, “Those who know oga knows that he is not the  kind of person that can be stampeded into taking a decision. That was why he remained calm in the face of the public calls for the minister’s sacking  last year.

“As it is now, since he is planning a cabinet shake-up, he may use the opportunity to ease the woman out. After all, during shake-up like the one being planned, he owes no one any explanation. He has the power to hire and fire.”

Another official was more categorical in his claim that Oduah might  not escape the imminent shake-up.

The minister’s  issue,according to him,  came up when the President was preparing his response to an 18-page letter written to him by former President Olusegun Obasanjo.
He said, “The consensus then was that Mr. President could explain all the issues raised in Obasanjo’s letter convincingly except the area that bordered on corruption.
“The observation people made that time was that it would be difficult to claim that the President did not harbour corruption with the continuous stay of Oduah in the cabinet at the time of replying the letter considering the calls by members of the public.”

Efforts to get the Presidency’s position on the presidential committee’s report  did not yield positive result   as the Special Adviser to the President on Media and Publicity, Dr. Reuben Abati, did not respond to the calls made to his mobile telephone lines.'