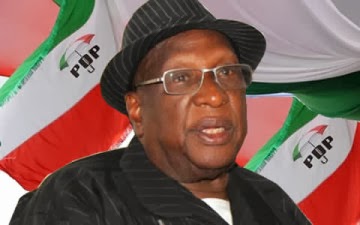 And Dame Patience, the wife of the President (Goodluck Jonathan) is said to have initiated moves to install a candidate of her choice as replacement.

Here is a fuller details of one of the most popular reports on the development.

A senior member of the divided National Working Committee of the party, who spoke with our correspondent in Abuja on Wednesday, said President Goodluck Jonathan will inform the meeting of the National Caucus of the party tonight in Abuja about the development.

With the resignation, Tukur has escaped being suspended from the party by the members of the NWC if he had refused to resign.

'Tukur was to be suspended by about eight members of the NWC, while the National Executive Committee of the party would ratify his suspension on Thursday.

Meanwhile, the wife of the President, Mrs. Patience Jonathan is said to be scheming to install Tukur’s successor.

The First Lady is said to be rooting for the appointment of the Minister of Transport, Sen. Idris Umar.

However, the governors are resisting the move.'
Posted by MAN ABOUT TOWN at 1:36 AM