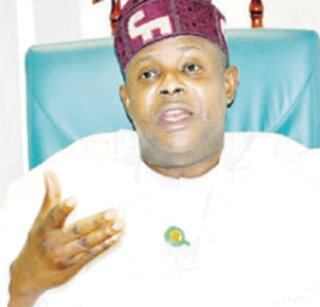 And the money man is described as usually on ground to be a part of the excitement.

Here is how online platform societynowng.com reports the development


'Federal House of Representatives Member, Abiodun James Faleke has kick started an innovation he loves to partake in at his popular leisure spot, I'level.

This development his tagged 'the introduction of Gogo dance'.

Informants disclosed the introduction comes to be on Fridays.

And sponsor and owner of the haven of fun
situated on Ogba, Lagos, Federal law maker- Abiodun Faleke is confirmed as 'usual around' to be a part of the show.

'Those familiar with his ways revealed he uses the opportunity to perform the multiple functions of, hosting political meetings, entertaining associates and friends and equally drive patronage from 'wannabes' striving to forge relationships with him.

A witness disclosed the last Gogo dance he luxuriate in at the place held on Friday December 20 2013.

He narrated the experience as ' the dancers who dressed half naked started on a mini stage on the open bar of the lounge, entertaining the fun seekers. The show started at about 10pm. The dancers were later moved inside the club where they performed relentlessly'.

Multiple sources claimed the move has helped the managers of the place boost patronage.

'Here is a link to background of how Faleke set up the growing in popularity fun place.'